A thousand years of Indians, Lewis and Clark and the oil boom – change over time

It is believed that before the arrival of the Europeans, Indian peoples lived in the area of ​​what is now North Dakota for several thousand years. After French Canadians visited the area and the Lewis and Clark Expedition explored the area, there were both French and Spanish claims to the Missouri River territory.

North Dakota was admitted to the United States relatively late. It was only in 1889 that the then President Benjamin Harrison signed a law which, in addition to North Dakota, also granted South Dakota, Montana and Washington access to the young confederation of states.

From the start, agriculture and animal husbandry were an important industry in North Dakota. An oil boom began in the 1980s, particularly in the Wilston Basin. During this time the population grew to 700,000 people. Today the population is again at 640,000.

North Dakota is a rather flat region. The highest elevation is in Theodore Roosevelt National Park. The White Butte is 1069 meters high. The landscape is characterized by broad plains, rivers and hills rather than mountainous relief.

Theodore Roosevelt National Park is located on Little Missouri and consists mainly of so-called badlands and prairies. Badlands are landscapes characterized by erosion. Wild stone formations and ghostly hills characterize the image of this region.

The Missouri flows in the center of North Dakota. It forms several lake landscapes, including Lake Sakakawea. This lake is formed as a reservoir by the Garrison Dam. It serves flood protection, fish farming and electricity generation for the sparsely populated region.

In winter, the many hiking trails that cross nature are often open to cross-country skiing. So you can explore nature not only in the pleasantly warm summers but also in winter.

North Dakota is located in the Midwest of the United States and is known for the legends and adventures it once harbored. The state’s scenery is so beautiful that it surprised former president Teddy Roosevelt, who built two ranches there. In Medora, one of the most famous places in North Dakota, visitors can stroll through the Painted Canyon, where there are mountain peaks cut with unusual shapes and colors.

Another place worth visiting is the International Peace Garden, a garden right on the border between the United States and Canada that symbolizes peace between countries. The garden covers 930 hectares in the Turtle Mountain region and has two ponds and trails for walking and cycling.

The 26th President of the United States was very environmentally conscious before taking office. He also lived a long time as a cowboy in this region. This national park is partly in the Badlands, the landscape with the fascinating rock formations.

Here you can also find grassy areas where bison roam peacefully. At various points there is an all-round view of the Painted Canyon. The restored wooden hut where Roosevelt once lived is now open to the public. It can be found in Medora.

This highway offers something special over a distance of 48 kilometers: an exhibition of large-format metal sculptures that show, among other things, grasshoppers, fish and other non-animal figures. The Enchanted Regent Hotel is also a popular destination.

Fort Mandan commemorates the explorers Lewis and Clark who set up their winter quarters here in Washburn and met the Indian chief Sakakawea.

In order to get a better impression of the country and its people, the two researchers put the results of their observations on paper and handed them over to the government when they returned from their trip.

The research work of these two intrepid researchers contributed significantly to the later settlement of North Dakota.

The bison and the prairie Indians are also considered in the exhibition. A herd of buffalo grazes here, the star among these large animals is an extraordinary white buffalo.

In addition to the large exhibition with thousands of exhibits, there is an amphitheater where events are held regularly.

Anyone interested in the history of the North Dakota Indians is in the right place at the Plains Art Museum in Fargo. This art museum exhibits native art from the region and across the country.

This park is located on the largest lake in North Dakota, Devils Lake. This offers excellent fishing and swimming opportunities as well as water sports activities.

This colorfully planted park recognizes the peaceful relationship between the United States and Canada. The flags of the two states are made of flowers. There is also a flower clock and a tower with a good view of the park. 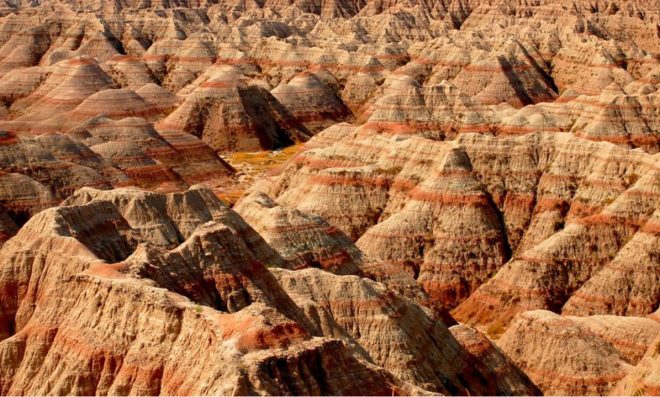