New Jersey, the fourth smallest state in the USA, is located on the east coast of the USA and has an area of​​19,215 km² and a good 8.5 million residents, ie a high population density. It borders New York in the north and northeast. The border is mainly formed by the 493-long Hudson River. In the east and south, the Atlantic Ocean and Delaware Bay form the border, in the west New Jersey is surrounded by Delaware and Pennsylvania.

The namesake is the island of Jersey in the English Channel. The New Jersey motto is freedom and prosperity. New Jersey is one of the Central Atlantic States. The capital has been Trenton since 1790. New Jersey was given the nickname “Garden State” because there are many parks and single-family houses with gardens and pools.

Only the approx. 550 m high high point stands out from the mostly flat country. Inland and south, New Jersey is dotted with thick forests. In the north it is hilly due to the foothills of the Appalachian Mountains, the northeast is characterized by the Hudson River, the south by the old Atlantic coastal plain. The Delaware Bay in the south is a good 2000 km² bay and alluvial area and the mouth area of​​the Delaware and other smaller rivers. It is a popular breeding ground for water birds. Oysters are also grown here.

The Pinelands National Reserve is the most important nature reserve in the state, including the Pinelands or Pinebarrens, a 4,500 km² forest area with Virginia pines and a popular destination for nature lovers. What is special about the flora is the carnivorous plants found here.

There are numerous seaside resorts on the Atlantic coastal plain to accommodate the numerous holiday guests. Here you will also find most cities such as Long Branch or Atlantic City.

New Jersey’s first settlement began in 1609, when it was the Dutch who built their first settlements here. Together with New York, the area was called New Netherlands. In 1664 the area was occupied by the English. During the American Revolutionary War, New Jersey was one of the main victims of the clashes with around 100 battles, particularly in Trenton, Princeton and Monmouth between 1776 and 1778.

The first constitution with the right to vote was adopted in 1776, at least for well-heeled citizens. Married women were excluded from the right to vote because they were not allowed to own property. New Jersey was one of the 13 original states and became the 3rd state in the United States on December 18, 1787. The current constitution has been in force since 1947.

New Jersey was the last of the northern states to abolish slavery in 1804. After the civil war, the formerly rural region experienced an industrial upswing. Thomas Edison, who was working in the city of Menlo Park, California at the time, had a significant share in this. The proximity of the booming cities of New York and Philadelphia also had a positive effect. The largest cities with Newark, Jersey City, Paterson and Elizabeth are in the metropolitan area, west of the Hudson River.

There are many amusement parks in New Jersey such as: The Six Flags Great Adventure in Jackson, the Six Flags Hurricane Harbor New Jersey water park, the Clementon Amusement Park, the Animal Kingdom Zoo in Bordentown and the Liberty Science Center in Jersey City. On the coast of New Jersey is the Shore Region, a vacation area with white sandy beaches and many historic sites over 203 km.

Gambling has been allowed in New Jersey since 1978 and you can challenge your luck in the casinos in Atlantic City, Seaside Heights and Point Pleasant. Millville is home to the largest glass museum in the world with over 7,000 exhibits.

For outdoor activities, the numerous parks such as the Delaware Water Gap, Jenny Jump, Swartswood, Wawayanda, Worthington or the National Recreation Park are just the thing. Here you can hike and indulge in water sports and in winter skating, tobogganing, snowmobiling. The towns of Vernon Valley and Great Gorge offer ideal slopes for skiers.

You can go fishing or canoeing on the Delaware River. For children there is the Land of Make Believe in Fantasy and the Fairy Tale Forest in Oak Ridge. Stanhope hosts jazz and bluegrass festivals in the summer. The place itself is a restored place with colonial houses.

Known for its proximity to New York City and Philadelphia, the state of New Jersey also features landscapes of the most diverse types, which make you forget about city life. For those who want to know the hustle and bustle of the region and enjoy a beach, Atlantic City is the best option.

The city is known for its lively nightlife, with casinos and clubs, as well as having an incredible amusement park on a pier. It is worth visiting the place during the summer and enjoying the best of Atlantic City.

There is a lot to see on the east coast. The Capital Region, one of the most exciting areas North America has to offer, awaits you there. Walk along the wide, golden sandy beaches, swim in the refreshing Atlantic and hike through the lovely Blue Ridge and Allegheny Mountains. Traces of the past can also be discovered in the region – immerse yourself in the particularly varied history. Somewhat more north lies New York City with its almost 8 million residents. Not only can many sights be found in the famous metropolis, the city is also just right for extensive shopping.

The East Coast is the center of the United States in several ways. In this area, which includes the states of New York, New Jersey, Delaware, Maryland, Virginia and West Virginia as well as Washington DC includes, the threads of politics, finance, economy, media, art and culture come together.

Not only can beautiful nature be enjoyed on the east coast of the USA, famous cities like New York City, Washington DC and Philadelphia are also in this region and have a lot to offer.

Visit the White House, the Washington Monument and the Smithsonian Institute in Washington DC and admire two of the most important symbolic sites in the USA with the Liberty Bell and Independence Hall in Philadelphia. New York City is particularly fascinating: the Empire State Building, the Statue of Liberty and the Brooklyn Bridge are among the highlights!

The best time to travel to the US East Coast is from May to October, often with plenty of sunshine. In November and December, New York City in particular is ideal for a trip: in the city decorated for Christmas, you are just right for Christmas shopping! 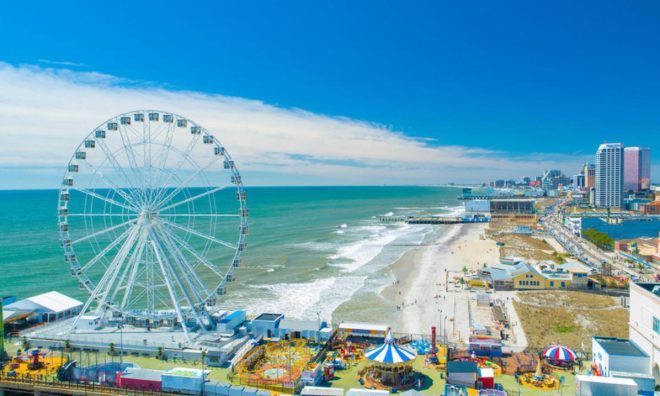