Minnesota is the twelfth largest state in the United States with 225,171 km² and almost 5.4 million residents. Minnesota was founded on May 11, 1858 as the 32nd state of the United States. A large proportion of Minnesota’s residents have German or Scandinavian ancestors. It is the second most northern state in the USA, only Alaska is further north. The state in the midwest is bordered by the Canadian provinces of Manitoba and Ontario in the north, by the Upper Lake and the states of Michigan and Wisconsin to the east. The neighboring states in the west are North and South Dakota. The southern neighboring state is Iowa. The capital is Saint Paul and has 290,000 residents.

The namesake is the Dakota, an Indian tribe of the Sioux family, it roughly means “sky reflecting water”. However, the common nickname is “Land of 10,000 Lakes”, which indicates the wealth of lakes in the state. The official state motto of Minnesota is “L’Étoile du Nord” (The Star of the North).

Minnesota is largely a flat country, except for the far northeast, where Arrowhead Country makes the landscape more hilly. There is also the highest peak with Eagle Mountain (701 m). The landscape was once shaped by glaciers, some of which were over 1 km thick. The northernmost point of the continental United States is located in the north of Minnesota on Lake of the Woods and is north of the 49th parallel. The country is crossed by numerous lakes. There are 11,843 lakes that are larger than 40,000 m².

The largely untouched nature is a popular destination for nature lovers. The main attractions are the Voyageurs National Park, the Big Stone National Wildlife Refuge, the Frontenac State Park or the Alexander Ramsey Park. The vegetation is very varied, prairie grasslands predominate in the west and southwest, deciduous forests in the southeast and boreal coniferous forests in the north, which are dominated by pine and spruce. In addition, birches and poplars grow here and there. Although a lot of forest has been cleared in the past, the forest stock has grown again on one third of the state. Unfortunately, through the land reclamation, a large number of animal species were driven out of their habitat. But there are still large black bear, wolf and white-tailed deer populations. There are also numerous wild birds such as geese, ducks, turkeys, pheasants, snowy owls, bald eagles and red-tailed buzzards. The lakes are home to numerous species of fish, including trout, perch and pike.

Minnesota’s climate is continental, resulting in cold winters well below zero degrees Celsius. Blizzards often appear in winter. Summers are hot and humid, especially in the southern parts of the country. June to August are the hottest months with an average of 25 degrees. The region around the Upper Lake is not so exposed to the stark contrasts of temperature, since the lake has a balancing effect on the temperatures. Average rainfall varies from 480 mm in the northwest to 860 mm in the southeast.

The untouched nature and the national parks offer nature lovers and hikers a wealth of activities. In addition, cities like Saint Paul or New Ulm with their cathedrals invite you to visit. The Capitol in Saint Paul, built in 1900, should not be missed either. The Walker Art Center and Sculpture Garden in Minneapolis are also worth a visit. Other sights are the Kensington Runestone Museum in Ortoville, a rune stone of the Vikings from 1362 is the highlight here. Bloomington is the largest shopping center in the USA with 390,000 m², even an amusement park with roller coaster and white water rink is integrated here. Also worth seeing is the Skyways in Minneapolis. These are closed bridges that connect many buildings with each other.

Minnesota is known for being one of the coldest places in the United States. In winter, temperatures reach minus 30 degrees, can you imagine? Sharing space with skyscrapers and places with nature, the state is the perfect place to get to know another side of the United States. The city of Minneápolis, almost neighboring the state capital – Saint Paul, is the right bet to enjoy a big city without giving up the cool attractions of the countryside.

Crossed by the mighty Mississippi River, the city has some postcards, including Stone Arch Bridge and St. Anthony Falls (St. Anthony Falls) that take tourists away. There is a great place for those who want to see a Broadway show and enjoy more sophisticated cuisine.

Minnesota is in the north of the country on the border with Canada. The name is Indian and means “water colored with sky”. Many lakes shape the beautiful landscape of the state. Most people live in the “Twin Cities” Minneapolis and Saint Paul. Not far from these cities is the largest mall in the United States, the Mall of America. Many national parks try to capture the beautiful landscape of Minnesota in time.

Saint Paul has approximately 285,000 residents and is the capital of Minnesota. Above all, in addition to many museums, Minnesota also has some cathedrals, churches and old buildings to offer.

In the Minneapolis-St. Paul is the largest indoor shopping complex in the United States. In view of the monumental landscapes and the richness of species, it is almost a sacrilege to even speak about a shopping center. However, if you have Minnesota as the destination of your USA trip, you will certainly travel to this metropolitan region, since there are otherwise only comparatively few larger cities in this natural state.

In the Mall of America, visitors can not only spend their money to their heart’s content, but also eat, drink and be entertained. 520 shops, 14 cinemas and the Sea Life Aquarium promise entertaining days with a diverse range of restaurants. The Nickelodeon Park is a nice destination for families. However, this metropolitan region has more to offer than just shopping and entertainment. Art and culture are not neglected in Minneapolis and St. Paul. Free life concerts, numerous museums, theaters and art galleries promise entertaining days with high-quality entertainment.

Minnesota has 66 state parks, numerous nature reserves and 57 state forests. The only national park is Voyageurs National Park. More than 10,000 lakes and numerous rivers run through the landscape, in which diverse sporting activities such as hiking, fishing, cycling, canoeing and rafting are possible.

If you love nature vacation, but don’t want to do without the comfort of a chic hotel, you should travel to Brainerd Lakes. In the middle of a beautiful natural landscape there are several first-class hotels with no less first-class golf courses.

Visitors to the National Eagle Center can learn all there is to know about the majestic eagle. Interactive exhibitions, eagle shows and observation tours are suitable for all ages.

The largest wolf population is located in Minnesota. It is therefore not surprising that there is also a Wolf Center, which brings visitors closer to these legendary animals. A varied entertainment program ensures that there is no boredom.

You can see that in Minneapolis people are not only connected to nature, but also to animals. The Bear Center is all about the local bear population. Visitors can admire both prepared and real specimens and take part in various programs and exhibitions.

This monument in the middle of the prairie is dedicated to the indigenous people of Minnesota. Here prairie Indians once cut stones out of the rocks to make them into pipes. An educational trail leads through a quarry that ends at Winnewissa Falls.

At this point where the Mississippi and Minnesota cross, the state began to settle in the mid-19th century. The open air museum gives interesting insights into the history of Minnesota, which is also reproduced by actors. 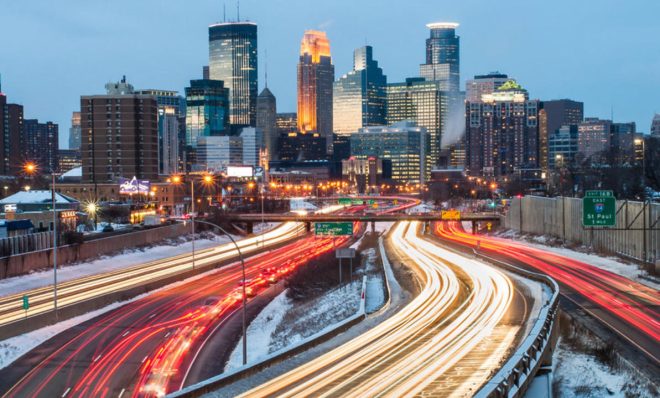