Rhode Island is a state in the United States of America and is located in the north of the country. It is the smallest state and belongs to the New England region. The capital is Providence. It was founded in 1636 and is located on Narragansett Bay.

Portuguese, Roger Williams and the number 13

Rhode Island was discovered early on by Portuguese seafarers but was not populated. The colony was founded by Roger Williams in 1636. He was an anthropologist, philosopher, politician and theologian. He was a Baptist and banished from the Massachusetts Bay colony. The colony was puritanical and Williams was not founded here. The colony was democratic from the start. Slavery was banned here early, in 1652.

The number 13 has a special meaning here. Rhode Island became the 13th colony in the Confederation of 13 Founding States, making it the 13th state in the United States.

In the war from north to south, Rhode Island was on the side of the northern states. It was the first state to send troops.

Small islands and a long coast

Rhode Island has a long coastline. Although the state is so small, there are longer and nicer beaches here than in many other places. The many islands off the coast extend the coastline considerably.

The islands are famous for their scenic beauty. White dunes and shallow water, green meadows, forests and hills. Everything you would expect from a coastal landscape can be found here. Block Island is particularly well known. The many possibilities and the tranquility make the island very well known and popular as a vacation destination in the USA.

Camping is possible in many places. Campsites in the hills and on the beach offer not only an inexpensive but also a natural vacation.

The many waterways and the coast keep attracting anglers. The possibility of fishing in the ocean and not just in the lake is very popular with many athletes. But other water sports are also possible. Sailing and boating and surfing are common on the beaches. If you want to relax in between, you will always find a quiet place without sport and without noise to just relax.

Known as the “State of the Ocean”, Rhode Island is truly defined by its relationship with its waters. It was Narragansett Bay that attracted the state’s original settlers, making it the smallest state in the country with the highest concentration of historic sites in North America! It is the perfect choice for those who want to enjoy a typical American city and learn a little more about the country’s history and colonization.

For those who like excitement, the tip is to visit the capital Providence. The place is known worldwide as one of the best cities to live in, with some of the best restaurants in the country. One of the main attractions there is WaterFire, a family celebration that celebrates the city’s culture with live shows, street shops and an incredible fireworks display – all on the riverbank that cuts through the city.

Rhode Island is a sight in and of itself. No visitor should miss the deep green, wooded headlands with their noble villas that extend into the Atlantic. Nevertheless, there are some very specific places that must not be missing on any travel program.

In Providence you can still see numerous historic colonial houses. The chic architecture also finds supraregional admirers, which Providence has nicknamed “Renaissance City”. The quality of life is considered to be above average. Here are some of the best restaurants in the country. A varied leisure and cultural program rounds off the positive picture.

The college and university density is comparatively high. One of the nicest permanent installations is WaterFire Providence. Three rivers flow together in the city center. At this confluence, 100 fire bowls burn every night, while street performers delight visitors with their performances.

This chic hotspot of the American high society also offers a varied excursion program for less well-heeled visitors. New Port is not only wealthy, but also young and dynamic and enthusiastic with a varied art and culture program as well as an upscale but affordable range of restaurants.

It is interesting to take a walk along the Cliff Walk, which leads through the National Historic District and offers a view of the gardens of the magnificent 19th-century estates.

This beautiful bay, located directly on the Atlantic, offers a varied outdoor and water sports program. The Mediterranean coastal region surrounded by forest is a popular destination. In total, Rhode Island can look forward to 650 kilometers of well-tended coastal scenery.

About 20 kilometers off the coast in the middle of the Atlantic is the gem Block Island, which is largely a nature reserve. However, a visit here is not prohibited. This small island is largely natural and is therefore a rare retreat for wild animals and birds. The rocky landscape with numerous nature trails is also ideal for hiking. 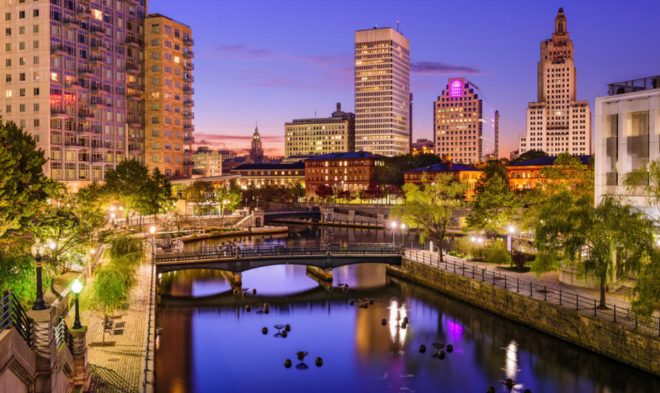