Indians, prairies and a lot of history – nature and people together

The history of the American Indians is often sad, and many of these sad events are also associated with South Dakota.

South Dakota and North Dakota were originally one state. After the division, South Dakota was incorporated as the state of the United States in 1889. South Dakota is the 40th state.

After being admitted to the United States, the indigenous people were increasingly displaced from their original areas. Many of the areas were subsequently flooded by the construction of dams and have thus disappeared.

The Badlands National Park is located in the southwest of South Dakota and is named after the Badlands, a certain type of landscape. The Badlands are unsuitable for agriculture and many other types of farming, hence the name Badlands – bad land.

Many species of animals and plants live in the national park and can be observed along the paths. Since the area has been inhabited for a long time and has always been inhabited by nature, researchers can always find fossils and remains of living beings and civilizations here.

The Wind-Cave National Park is located in the west of the state and is named after the caves that take on impressive shapes here. They are shaped by the strong wind that sweeps through the landscape and reach great lengths and unusual shapes.

South Dakota is also called Mount Rushmore State. Here is the famous Mount Rushmore Memorial. The faces carved into the stone of the mountain come from the important US presidents George Washington, Thomas Jefferson, Theodore Roosevelt and Abraham Lincoln. The monument is extremely well known and everyone knows the picture even if he or she has never been there. Again and again it appears in film and television and is a landmark and a symbol for the history of America and of course for South Dakota.

South Dakota offers countless outdoor surprises, making it a perfect destination for enjoying natural attractions. One of the postcards there (and the United States) is Mount Rushmore, known for having the faces of four former US presidents carved in the stone of the mountain itself.

George Washington, Thomas Jefferson, Abraham Lincoln and Theodore Roosevelt can be seen from different parts of space – from lookouts and strategic places to take photographs. The attraction started to be made in 1927 and it took 14 years to be ready.

This attraction is one of the most famous tourist destinations in the USA. Here in the lonely southwest of South Dakota in the Black Hills, four faces of former presidents look down on the visitors, apparently admonishingly and somewhat strictly. This fascinating mountain sculpture shows the faces of George Washington, Thomas Jefferson, Abraham Lincoln and Theodore Roosevelt.

There is a visitor park around the mountain monument, which not only celebrates America’s diverse history, but also hosts numerous events.

If you want to spend an active vacation day, you should visit the Badlands National Park. The grassy rocky landscape contains fossil beds that are more than 30 million years old. The mixed grass prairie is home to a diverse flora and fauna, so an informative day is guaranteed.

This state park, named after General George Custer, offers comfortable lodges as a starting point for excursions into the surrounding mountain ranges. Here, however, nobody has to be a professional mountaineer, because there are numerous paved roads that lead through bison herds. An exploration by car offers the opportunity to get to know this vast area without physical exertion.

South Dakota is a journey through time to the wild west. If you’ve always wanted to see a historic gold mining and western town, Deadwood City is the place to be. The well-preserved and repeatedly restored western town offers shopping as well as restaurants and cafés.

Calamity Jane’s final resting place is in this historic city. In Saloon No. 10 is reminded of the famous poker game in which the no less famous Wild Bill Hickok was killed by a revolver shot at his opponent Jack McCall.

The famous Indian chief is an integral part of South Dakota’s history. The Oglala warrior and his Sioux tribe were at home in this state before the white settlers took the country from them. The Crazy Horse Memorial honors these South Dakota residents and shows the warrior in the form of a large statue sitting on a horse.

This national park has one of the longest cave systems in the world. When entering, visitors hear a whistle caused by the escaping wind. Sometimes the sun bathes this cave in warm light, giving the impression of golden rock walls.

Numerous wild animals such as prairie dogs, bison and wapitis feel at home in the national park. The flora is also quite diverse here.

This popular recreation area commemorates the brave adventurers and explorers Lewis and Clark, who were commissioned by the government in the first half of the 19th century to explore the still undeveloped western United States. 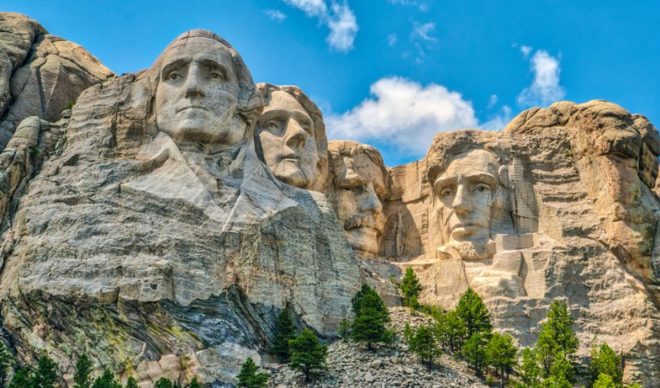