The 62,755 km² state of West Virginia is located in the eastern United States, in the Appalachian Mountains and in 1863 became the 35th state in the Union. In the American Civil War, West Virginia separated from Virginia because of the different opinions on slavery. West Virginia is bordered in the north by Ohio and Pennsylvania, in the east by Maryland, in the southeast and south by Virginia and in the west by Kentucky.

West Virginia in the Appalachian Mountains – Coal Mining and Tourism

The capital with approximately 50,000 residents is Charleston. Because the state is a mining region, it is also called the Mountain State. Coal mining and tourism are the main sources of income.

The geographic structure of West Virginia

West Virginia is located in the middle of the Appalachian Mountains, which extends from the Canadian province of Quebec to Alabama over a length of 2,400 km. Most of West Virginia is occupied by karst areas. The landscape is very varied with forests, lakes, caves and rivers. The Cumberland Plateau, part of the Appalachian Mountains, along with the Allegheny Plateau, occupies a significant part of West Virginia. The plateaus were named after the two largest rivers in the state, the Cumberland River (1,106 km long) and Allegheny River (523 km long), which flow through there. To the east of West Virginia is the Monogahela National Forest with the highest mountain, the 1,482m Spruce Knob. Because coal mining has been practiced intensively in West Virginia for many years, due to the wood required, for mining, overexploitation and clearing large forest areas. It was only in the recent past that the bare areas were reforested.

Places to visit and events in West Virginia

The capital, Charleston: here is the Co-Cathedral of the Sacred Heart. This Catholic cathedral was built between 1892 and 1897 in the Neo-Romantic style of limestone. The Clay Center, a museum of art and science, or the State Capitol, the city’s tallest building, opened in 1932. The landmark is the gold-colored dome.

The small town of Berkeley Springs, known for its healing springs and a spa since the 18th century. Berkeley Castle, a massive Victorian-style building that resembles a castle. It was built on a hill in 1885.

The Monongahela National Forest is still partly natural. Most of it is in the Allegheny Mountains. This is where the Potomac River originates. Here is also the place White Sulfur Springs, known for its hot springs and has been a seaside resort since the mid-19th century. The landscape of the forest area is criss-crossed with rock formations that can be overlooked from viewpoints.

Not far from Lost Creek is Watters Smith Memorial State Park. The park is home to many historical buildings and a museum over a surface of 2 km². It was opened in 1949. The namesake is the settler Watter Smith, whose farm from the 18th century can also be visited here.

The State Fair of West Virginia has been held in Fairlea, near Lewisburg, since mid-August 1881. It is a folk festival, with exhibitions from agriculture and industry. There are also bingo events, horse races and beauty pageants.

The National Radio Astronomy Observatory, built by the state research organization, is located in Green Bank. It has a diameter of a good 100 m and is therefore one of the largest radio telescopes in the world.

The Contemporary American Theater Festival takes place once a year on the Shepherd University campus in Shepherdstown. The event serves the development of American theater. In addition to the performance of pieces, new pieces are also created together. This festival has existed since 1991.

From mid-September, when the leaves change color, West Virginia nature shows its most beautiful side. The Indian Summer begins and the trees and bushes show their leaves and leaves from the most colorful side. The bright autumn colors determine the picture in the natural landscapes in autumn.

The New River Gorge National River and National Park is particularly impressive. It is a credit to the mountain state of West Virginia. The main attraction is the gorge through which the river winds. From the bridge that spans the gorge you have a wonderful view. The rapids of the river are used for river rafting. Courageous people do base jumping from the 270 m high bridge or abseil from the dizzying height.

The climatic conditions of West Virginia

The climate in West Virginia depends on the altitude. In general, however, there is a humid continental climate with warm summers and cold winters. Hurricanes or tornadoes rarely occur, but summer thunderstorms occasionally lead to flooding. The average temperatures in the winter months fluctuate from west to east between 1.4 degrees plus and 1.1 degrees minus. In summer they are between 23.9 degrees and 24.1 degrees from west to east. The rainfall is spread over all months. Winter can be very snowy in the Appalachian Mountains. The best time to travel is from May to October.

With options for all seasons, the state of West Virginia never ceases to impress by the summer sun, the different shades of autumn or the long, harsh winter.

Charleston is the state’s capital and main tourist spot. With the air of a big city, the destination does not escape much of what is expected from an American city, but it has several tourist spots that are nice to visit without hurrying on a walking tour. 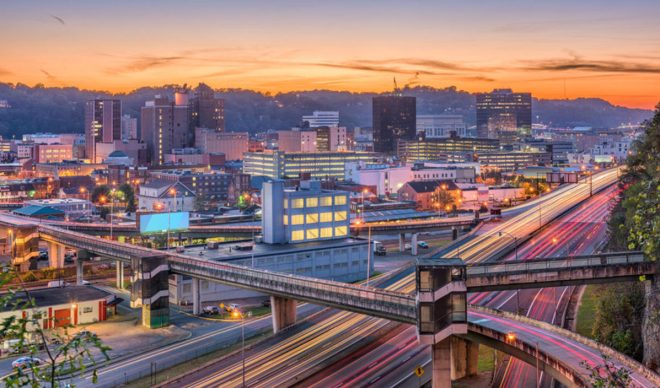