Covering an area of ​​184,665 km² and with approximately 6.8 million residents, the state extends to the far northwest of the United States. The capital with a good 48,000 residents is Olympia, while Seattle is the largest city in the state with over 650,000 residents. Washington is bordered by Canada (British Columbia Province) to the north and the Pacific to the west. The neighboring countries in the east and south are Idaho and Oregon, respectively. Washington became the 42nd state of the United States on November 11, 1899.

The nickname “Evergreen State” refers to the landscape.

Washington is a forested state, large forests run through the country with its mountains, volcanoes, mountains, islands and rivers.

The first Europeans to enter the country in the 1770s were Spanish sailors. The settlement of Washington began a little later by the Russians and the British. It was fur traders who set up the first trading posts here. Today’s cities Spokane or Walla Walla were once such trading posts. However, Washington has been inhabited by the indigenous people, the Salish or the Spokane for about 14,000 years. However, by introducing smallpox from the Europeans, the tribes were severely decimated or partially exterminated.

The USA only took over the area from the fur trading companies in 1849. In 1889 Washington then became a state. The indigenous people were gradually pushed back into reservations, which was not without conflicts. Initially, the country on the Pacific was only populated by fur traders or gold prospectors. Wood was also traded. It was only when the time of the railroad came up that the industry went up. Seattle became the economic center, especially the aircraft industry caused an upswing. Tourism was booming with the establishment of the national parks.

Washington is over 50 percent forested and is at an average height of 520 meters above sea level. Mount Rainier is the highest mountain at 4,395 meters. The longest river is the Columbia River, which is also the most water-rich in North America. Washington is crossed by many rivers. The most important are the Columbia River, the 1,674 km Snake River, the Pend Oreille, the Okanogan River, the Lewis and the Cowlitz River. Some rivers were dammed on the way to the sea and artificial lakes such as Franklin-Delano-Roosevelt or Rufus Woods Lake were created. The largest natural lake is 81 km long and 1.5 km wide Lake Chelan.

The contrasting natural landscape of Washington is divided into the rainy coastal and mountain region in the west and the relatively flat and dry east. On the Pacific coast, sandy beaches, rugged cliffs and the island world in Puget Sound, a 150 km long island-rich bay, determine the landscape. The Olympic peninsula surrounding the Puget Sound, with the Olympic Mountains, is a mountain range up to 2,500 m high, very rainy and heavily forested. The volcanic cones of the Cascades Mountains with Mount Rainier and Mount St. Helens (which caused a worldwide sensation due to the volcanic eruption in 1980) give the region a distinctive character.

Further to the east are the Yakima Valley, an important wine-growing region and the vast expanse of the Columbia Plateau. Low-desert semi-desert areas dominate here. In the northeast, the 2,175 m high Kettle River Range towers over the landscape, further south is the Selkirk Mountains with up to 1,800 m high peaks. In the southeast, the Blue Mountains determine the region at an altitude of up to 2,700 m.

A variety of animals live in Washington. The Olympic Park in particular has a large biodiversity. Deer, black bears, mountain lions, pumas, deer, mink skunks, martens, rabbits, bobcats, raccoons live here. Gray whales can be seen on the coast and in water. Seals, river otters and on the coast. Here you can also find the up to 40 cm long tiger salamander. In addition, there are many bird species here, such as bald eagles, hawks, kestrels, hummingbirds, woodpeckers, Canada geese or ptarmigan.

Washington offers a variety of outdoor activities and sights

The national parks offer a variety of leisure activities such as hiking, mountaineering, horse riding, boat and canoe tours, nature observation, fishing, skiing in winter. The main national parks are:

Near Tacoma and Seattle is Mount Rainier National Park, dominated by the 4,392 meter high Mount Rainier, the highest mountain in the Cascade Range. It is also home to the largest contiguous glacier area in the United States. Around 1.8 million tourists visit the park every year. Here you will find 5 areas developed for tourism, 4 of which are equipped with a visitor center. The streets within the park run halfway around Mount Rainier. The Trail of the Shadows is a nature trail. There are several hiking routes that go to the most interesting places in the park. For example to the 50 m high Narada waterfall or the Reflection Lake or in the south the Box Canyon. And you can find the popular but strenuous Wonderland Trail here, which leads around Mount Rainier with a length of 150 km.

This is the only rainforest area in North America. The area of ​​the 4,000 km² park extends around the snow-covered 2,428 m high Mount Olympus. In Olympic National Park located 960 km hiking trails that lead to the most beautiful places and viewpoints. Here you can find the largest trees in the world in the rainforests with a height of up to 100 m. The over 100 km long coastal landscape on the Pacific is also worth a visit.

The 445 km² protected area covers the region around the volcano Mount St. Helens erupted in 1980. The best viewpoints can be reached via cul-de-sacs and you can see how nature has since recovered from the eruption. The largest visitor center of the National Volcanic Monument is located near Silver Lake. Here you can learn everything about the volcanic eruption and the fauna and flora. There are also exhibitions on the geology of the region. A special experience is the exploration of the Ape Cave, a 2,000-year-old lava tube 3 km long and the Lava Canyon, a lava flow that was washed out by the Muddy River.

The state of Washington borders Canada and is located in the region of the so-called Pacific states. That’s where the famous city of Seattle is located. Seattle is known for bringing big city and nature together in one place. Known as the “emerald city” because of its green areas, the city offers popular and cultural routes to tourists, who can still explore the national parks close to the city.

One of the must-see places in Seattle is the Space Needle, the largest postcard in the city. It is a 184 meter high tower with an observation deck in the shape of a flying saucer.

Washington is located north of Oregon and borders the Canadian province of British Columbia. The state of Washington should not be confused with the state capital, Washington DC

Seattle is the largest city in Washington and is particularly characterized by many parks, lakes and coffee shops. At the same time, however, Seattle is a metropolis and offers a public transport system so that young people can also get around easily. Most tourists who visit Washington State fly to Seattle, the most important city in terms of tourism, and drive from there into the state. Seattle is a very beautiful city with many attractions and a lively cultural and entertainment scene.

The majority of the population is concentrated around the Puget Sound in the west of the state, where the capital Olympia and Seattle, by far the largest city, are located. 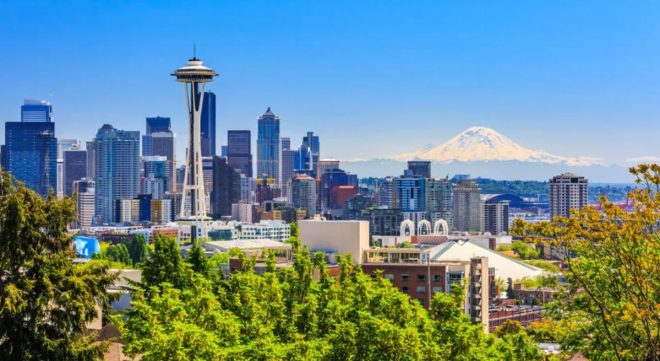