Virginia was the 10th of the 13 founding states to join the United States in 1788. Virginia is bordered by Maryland to the north, West Virginia to the west, Tennessee to the southwest and North Carolina to the south and is 110,785 km² in size. Virginia, which is relatively densely populated with about 8 million residents, is also called “Old Dominion” (old state territory). The namesake was the English Queen Elizabeth I (the Virgin Queen) because she was unmarried. Richmond is the capital of Virginia.

Virginia is also referred to by name as the “Mothers of the Presidents”, since many later presidents have their roots here. B. George Washington, Thomas Jefferson, James Monroe or James Madison.

Virginia – one of the 13 founding states

Virginia has been a member of the State Union as the 10th state since 1788. West Virginia was originally part of Virginia, but the northwestern districts separated from Virginia during the Civil War. The region was first settled by the English and the first settlement called Jamestown on the river of the same name, the James River, was founded in May 1607.
The namesake was the English King James I (1566 – 1625) of England. Williamsburg was the capital when Virginia was still an English colony.

The British colonialists were defeated in the American Revolutionary War in 1775 and independence was officially declared in Williamsburg in May 1776. Before the industrial revolution in the 19th century, Virginia was the most influential state in the United States. With the build-up of industry in the big cities of the north, many migrated from agriculture-dominated Virginia and the state lost its influence. The last decisive battle of the North American War of Independence took place in Yorktown in 1781.

Virginia was originally inhabited by various Indian tribes, such as the Powhatan, Nottaway and Meherrin, which are related to the Iroquois. The Monacan and Sapomi, close to the Sioux, settled in the region around the Appalachian Mountains. The Cherokee still lived in the west.

Many historical sites from the civil war

In Virginia there are many historic buildings from the Civil War period that can be visited. Especially in the National Battlefield Park in Manassas you can find a lot of monuments. In Richmond you can visit the State Capitol designed by Thomas Jefferson and the Edgar Allan Poe Museum. There are beautiful beaches on the coast. A visit to Virginia Beach is particularly recommended, a large number of hotels line Atlantic Avenue here and the beach is wide and fine sand.

The landscape in Virginia is very varied with the coastal region on the Atlantic, the Appalachian Mountains and the Piedmonts, a plateau-shaped region where wine is grown and extensive tobacco fields can be found. There are also plenty of historic sites from the Civil War to visit, including Manassas National Battlefield Park, Arlington National Cemetery, a Heroes’ Cemetery of the Unknown Soldier, or the Colonial National Historic Park. The first English settlement was established there in 1607.

Today actors are recreating life there at that time. Furthermore, you can visit the memorials or former residences of the US presidents from Virginia at various locations. So z. For example, the George Washington manor in Mount Vernon or the George Washington Birthplace National Monument near Fredericksburg.

In the national parks, such as Shenandoah National Park, there are many hiking routes over 800 km that lead through a beautiful natural landscape. A special experience is a hiking tour on the 750 km long Blue Ridge Parkway in autumn. Then the leaves change to the most beautiful colors (Indian Summer).

You can also explore the parks by car and there are many beautiful viewpoints with a wonderful view of the landscape. Especially the Blue Ridge Mountains, part of the Appalachian Mountains are worth a trip. Part of the Appalachian Trail also takes place here. Also interesting are the Luray Caverns in the Shenandoah Valley, where you will find huge, colorful caves and the only stalactite organ in the world. The Natural Bridge is a limestone rock arch that spans Cedar Creek.

Virginia’s natural landscape offers many opportunities for hikers, riders, mountain bikers and in winter for skiers and snowboarders to practice their sport. Climbing the highest mountain in Virginia, the 1,700 m high Mount Rogers, is a special challenge.

On the trail of the Indians

Recently, the culture of the Indians has also been incorporated into tourism. Owing to the growing interest of tourists in the culture of the Native Americans. Indian cult sites, Indian trails and tools are increasingly integrated into the tourist offer. This is how historic canoe trips are organized on the Clinch River.

At the American Indian Festival in Chesapeake, you can listen to Indian storytellers, along with performances and traditional dances. Jewelry, handicrafts and Indian dishes are offered at stalls. There are museum villages like “The Monacan Indian Living History Village” in Natural Bridge. In Altavista you can marvel at old Indian ornaments and everyday objects. The exhibition can only be visited in October.

In the southern parts of the Atlantic coast there is a humid subtropical climate with maximum temperatures of approx. 30 ° C in July and minimum temperatures of approx. -3 ° C in January. The coastal areas, mainly in the southeast, favored by the Gulf Stream, have a milder climate. In the higher areas like the Blue Ridge Mountains you can find subtropical highland climates. The rainiest month is August while the least rain falls in April. In general, the region is rainy with many thunderstorms per year. Hurricanes and tornadas are rare in Virginia compared to many other countries.

Founded in 1607, Virginia was the first British settlement in the Americas. The province was one of the Thirteen Colonies that fought against such dominance in the United States War of Independence. For those who want to enjoy nature and embark on a road trip through the state, it is wise to include Shenandoah National Park in the itinerary.

With trails, waterfalls and green areas, the place is usually a popular tour during spring / autumn, when the trees are more colorful, providing a breathtaking landscape. 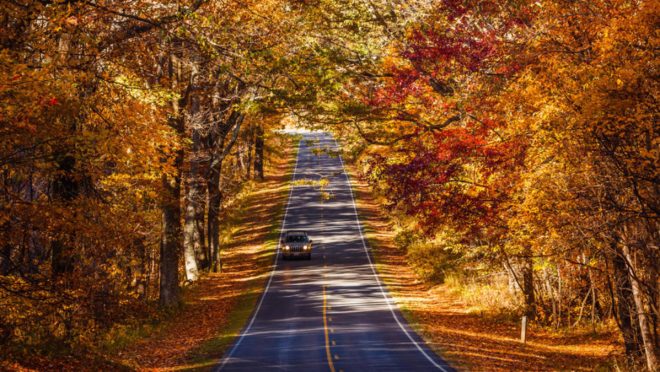