Vermont is a state of the United States of America and is located in the northeast of the country. The state is part of the region known as New England. Vermont’s northern border separates the state from Canada. The capital, Montpelier, is in the center of the state. The state motto is Freedom and Unity.

Vermont’s history goes back a long way. The region was originally populated by various Indian tribes. Among other things, the Iroquois lived in this region.

French explorers were the first Europeans to reach Vermont.

The state became a colony of Great Britain after the immigration of European settlers.

Even today, Vermont is still a pioneer in America’s political and social issues. In 2009, Vermont became the first state in the United States to introduce marriage for same-sex couples.

Today Vermont is a popular vacation destination for many people.

The country has become an attractive travel destination for thousands and thousands of people.

The region attracts many visitors, especially in the winter sports season.

Vermont, on the Canadian border, is the perfect destination for those who want to see new places without neglecting their adventures. As it is a region that invests a lot in agriculture and nature, the state is full of beautiful landscapes and trees – this is why the place received the title of State of the Green Mountain.

Montpelier is considered the smallest capital city in the United States, but it is full of historic attractions and eccentric attractions. The Winooski River flows through the heart of the city and joins the charming center, the picturesque shops, the hiking trails and the cultural facilities, enriching the personality of the place.

‘The Green Mountain State’ – The epithet says what the French explorer Samuel de Champlain felt: He called today’s Vermont ‘Les verts mont’ (The Green Mountains) – so it is clear where the name comes from. Vermont is a, if not the, classic Indian summer state that attracts crowds of visitors every year who want to see the foliage change in the fall.

Maple Syrup is one of the key products made in Vermont. On the one hand, the state is agricultural, but it is also known for its marble and granite quarries. Vermont is also the perfect country for outdoor freaks, whether cycling, hiking, climbing or canoeing – there are endless possibilities.

The ecological attitude of the residents has created a green, fertile landscape with agriculture and numerous farms and small farmers. The low mountain range of the Green Mountains runs on a north-south axis from the Canadian border to southern Vermont.

At the foot of these green mountains are idyllic villages and small towns. Well-maintained cycling and hiking trails invite you to explore this small state. Grains, vegetables and fruit are grown in the fertile valleys. Livestock farming includes horses, goats, cattle and even some emus. Numerous wineries and breweries have settled here. Farmers’ markets, museums and traditional country stores with their nostalgic offerings bring the past to life.

Vermont is a special way of life, characterized by a rebellious spirit, because everything here is different, green and eco. Every season offers the opportunity to explore this gentle green landscape. Everything is possible, from mild summer to colorful autumn to snowy winter on the ski slopes.

Vermont has the highest snowfall rate in the East Coast states. The Killington ski area is one of the best and most modern in the region. Five terrain parks and 200 ski slopes of different degrees of difficulty with après ski offer the right program for every winter lover.

This lake, named after one of Vermont’s founding fathers, is a popular destination. Visitors can take boat tours, take a stroll through the maritime area, enjoy a good meal in one of the restaurants, go fishing or cycling.

If you want to take a break from the exemplary ecological lifestyle, visit Church Street Market Place in Burlington. In this pedestrian area, this is modern life still fed, because in addition to historical buildings and a beautiful city, there are about 100 shops and restaurants, the right shopping mood making and appetite.

This park is named after the three famous American industrial families. The nature conservation-oriented site is home to a sustainably managed forest, which is also the oldest stock in the country. A 19th century manor house clearly shows how people once lived here.

It was here that the turn of the American War of Independence was reached in 1777. A special experience is the elevator ride to lofty heights, from where a panoramic view of Vermont, Massachusetts and New York opens in fine weather. 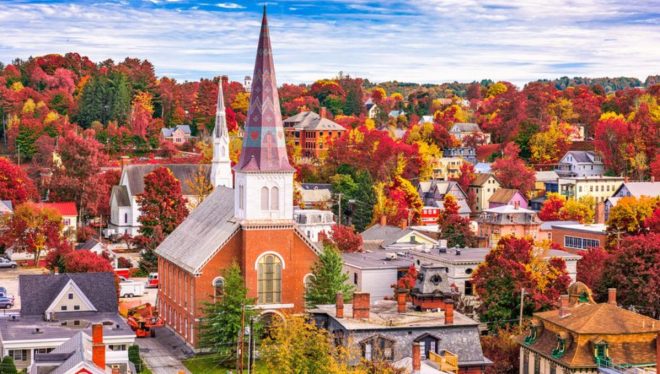