South Carolina is a state of the United States. The state is located in the east of the country and is roughly the size of Austria. The state was named after King Charles I of England, whose Latin name was Carolus. The capital name of South Carolina is Columbia. However, the traditional capital is Charleston.

South Carolina played an important role in the US Civil War. In December 1860, it became clear that Abraham Lincoln would become the next President of the United States. As a result, the state officially separated from the United States and other states followed. The so-called Civil War developed from this. Of course, this was not the only reason for the outbreak of fighting between the northern and southern states, but South Carolina’s role can still be recreated in old songs and stories.

South Carolina’s landscape is dominated by water in almost all places. The southern border with Georgia is the Savannah River. The Atlantic lies to the east and there are extensive swamps in the estuaries of the rivers. The nature here is unique and is recognized with some nature and state parks.

Congaree National Park is located in South Carolina in the swamp area. Some sources say that it is the largest area of ​​natural forest in America. The park is named after the Congaree River that flows through it.

Charlston – The port city with a moving history

Charlston was the capital of South Carolina until 1788. Many 19th century buildings are still preserved today. The city is therefore a popular travel destination for architecture lovers. In addition to the architecture, there are also many places where history can be experienced up close.

Between the sea and the mountains, in the heart of the southeastern United States, South Carolina parades irresistible colors and flavors, which become even more special with the warm welcome of its residents. Hilton Head is an island off the coast of the state that is a paradise for those who love beach and golf.

The place is known for giving a lot of value to outdoor activities, so the tourist finds miles of bike trails, outlets, in addition to all the comfort of the most luxurious resorts.

Camden is one of the oldest inland cities. Numerous historic houses testify to the colonial era and the “Grand Old South” period before the Civil War. A historic site provides information about the battles during the War of Independence and the American Civil War. There are several antique shops and good shopping in the city center.

This quaint town is at the foot of the Blue Ridge Mountains. The city is nestled in a green river landscape, from which you can enjoy a great panoramic view from the beautiful Liberty Bridge. If you like hiking, you should go along the Swamp Rabbit Trail in the immediate vicinity of the city. The American Legion War Museum revives various war epochs. Numerous exhibits vividly explain the various wars that America has waged over the centuries. Popular photo opportunities are two exceptionally beautiful bridges, the Poinsett Bridge and the Campell’s Covered Bridge.

Columbia is not only the capital and seat of government, but also has a lot to offer for entertaining days. The government is located in the historic state house. A family outing is available in the large zoo. The largest museum in the southeast of the country is housed in an old textile factory. Other historic attractions include the Woodrow Wilson House, the Robert Mills House and Garden and the exceptionally beautiful gardens of the Hampton Preston Mansion. The city is framed by three rivers and a lake, which offer opportunities for various water sports. 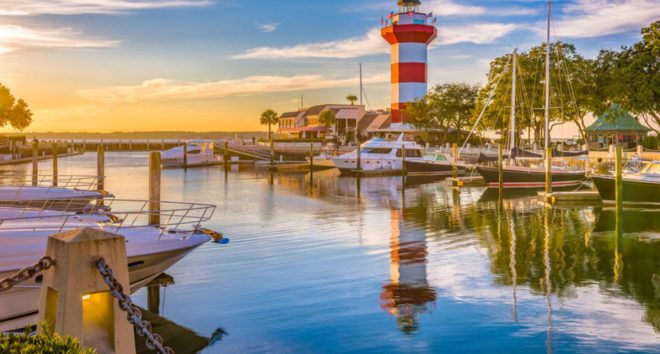