Pennsylvania is a state in the United States of America and is located in the northeast of the country. Pennsylvania was founded by William Penn and is one of the founding states of the United States. The capital is Harrisburg, but the largest city with about 1.5 million residents is Philadelphia. The state’s official name is Commonwealth of Pennsylvania.

When the Swedes came – Pennsylvania’s history

Before the Europeans founded their first settlements in this area, numerous Indian tribes lived here. Over time, however, these were exterminated by the settlers and other Indian tribes.

The first European settlers in this area were Sweden. Today the largest part of the population with approx. 28% of German descent. England was in control of this area. In the 17th century, William Penn traveled with a group of Quakers from Europe to this area to found a new colony. The English crown made him governor of the only Quaker state. The area was later named Pennsylvania.

The state became famous when the United States Constitution was signed in Philadelphia in 1787. Today’s Independence Hall quickly became a national and international attraction. Pennsylvania was the second state to join the new union.

During the Civil War, Pennsylvania became famous again through the Battle of Gettysburg.

Pennsylvania is now internationally known for Groundhog Day. Every year on February 2nd, a major festival of this kind is celebrated in various locations in the United States and Canada. The largest of the festivals is celebrated in Punxsutawney. This location became known in 1993 with the film “And the marmot greets you” with Bill Murray.

Every vacation in Pennsylvania is up to an hour of history class. No matter whether in nature, in the city or in the museum. Everyone is touched and familiarized with the history of the United States in one way or another.

The beautiful landscape, the many lakes and rivers invite you to a variety of outdoor activities. Pennsylvania has a total of 121 state parks.

For those who prefer to spend their vacation in civilization, tons of attractions are available. The Philadelphia Zoo is the country’s first zoo and is still open today.

Your Pennsylvania vacation trip begins in one of the nation’s most historic cities and the birthplace of the United States: Philadelphia. The city is home to Independence Hall, the famous Liberty Bell and the National Constitution Center.

For those who love art, the city of Philadelphia is also a great destination as the Philadelphia Museum of Art is among the largest art museums in the United States. More importantly, the skyscrapers and shops make it an incredible destination for shopping.

Pennsylvania is located in the eastern United States and is one of the thirteen founding countries. The mighty Eriesee borders in the north, in the west of the country you can see the low mountains of the Appalachian Mountains. Hilly country and deciduous forests shape the landscape of this state. While mining and the steel industry are the main economic factors in the west around Pittsburgh , the hilly countries in the east are more dominated by farmland. Pennsylvania is also known for the Marmot Day, which is traditionally celebrated on February 2nd.

Harrisburg has just under 50,000 residents and is the capital of Pennsylvania. The beautiful city with the old buildings is located on the Susquehanna River and offers many shopping opportunities. The city can also be reached by plane.

Ideally, the journey begins in Philadelphia, where the Independance Hall is located, where the founding fathers signed the Declaration of Independence in 1776 and the American Constitution eleven years later. Other historic monuments are the Liberty Bell and the National Constitution Center.

Art fans will also get their money’s worth here because the Philadelphia Museum of Art is one of the largest art museums in the United States. The Reading Terminal in the middle of the city offers large market halls with fresh regional and homemade specialties. Numerous ethnic restaurants are also located here. Since Pennsylvania is the cradle of the nation, the state motto is accordingly virtue, freedom and independence.

The second major city is Pittsburgh, which is best known for sports and the surrounding river landscapes. However, the city is increasingly developing into a modern location for companies in the environmentally friendly energy and technology sector. The Laurel Highlands extend just outside the city.

The area around the disused Great Allengheny Passage railway line and the surrounding river areas invite you to explore the landscape by hiking or cycling. Visitors interested in architecture should not miss the works of art by the famous architect Frank Lloyd Wright.

Educational tours and group programs provide information on one of the most important battles of the American Civil War, which took place here in Gettysburg. Visitors learn about the important role of U.S. President Abraham Lincoln, who delivered his famous Gettysburg speech in the middle of the battlefield.

The term Pennsylvania Wilds describes a picturesque and varied landscape that spans eleven counties. Each of these counties has its own character and historical heritage. Here there are more than a million hectares of nature reserves and extensive mountain and forest landscapes.

Visitors can expect a fascinating biodiversity and a landscape criss-crossed by rivers and lakes that invite to sporting activities. In between are hospitable towns that give visitors an authentic glimpse into the lives of the people who call Pennsylvania home.

This park with the historical monuments allows an insight into the emergence of the national continental army of the American War of Independence.

This destination, which is interesting for families, is not only known for its chocolate production, but also for its connected amusement park with numerous rides.

This gently rising and forested mountain landscape is in the northeast. 150 hidden small lakes and idyllic villages enable a relaxing holiday away from the metropolises and contact with hospitable residents.

This lovingly and extensively restored former railroad in Amish County is not a worthwhile destination for railroad fans. This area is so popular that it is designated as a tourist region. There is much more to experience here than just a train, because physical well-being is also taken care of. The themed trips range from crime games to a culinary well-being experience. 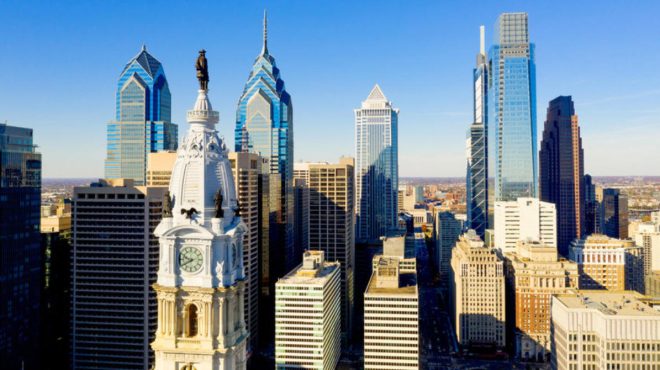