Oregon is a state of the United States of America and is located in the northwest of the country. Located between the mountains and the Pacific, the region offers a variety of different landscapes and natural beauties in a small space.

The geography of Oregon – mountains, cities and wide valleys

The capital city of Oregon is Salem and is located in the north of the state. The climate in Oregon is very fertile and the plains between the mountains were used by farmers as fields early on. To the west is the Pacific and to the east the Snake River borders the region. The Snake River is a tributary of the Colorado River and has its source in Yellowstone National Park.

Even before the Europeans came to Oregon to settle here, the most diverse Indian tribes lived here. Among other things, the Nez Percé also had their home here.

In 1778, James Cook discovered the Oregon coast in his search for the Northwest Passage. The Lewis and Clark expedition also passed through the region.

The area was long ruled and administered by the British crown, and Britain had supremacy here even in the British-American War.

In 1859, Oregon was admitted to the Union after a territorial reform. This made Oregon the 33rd state to join the community.

In the 19th century, many settlers came to the region via the Oregon Trail. Almost 7000 people traveled this way from east to west to settle in the newly developed areas.

Oregon is a land of contrasts. From the Rocky Mountains it goes down to the Pacific coast.

Oregon is also a land of lakes. The Crater Lake is located in a mountainous landscape and radiates dark blue in the sun. It is also called the “Blue Wonder” by the people of Oregon.

The sand dunes of Oregon are completely different. The Oregon Dunes National Recreation Area offers excellent opportunities to explore and enjoy this unique structure. The dunes cover an area of ​​approximately 60 km on the state’s coast.

The mountains also offer a true natural spectacle. The Mount Hood with its white cap shines from afar in brilliant light and seduces even the most muffle of movement to a short hike along the endless hiking trails of Oregon. Huge forest areas and cool glaciers stretch down the mountain slopes and are crossed by small and large streams.

And don’t forget the delicious cheese from Tillamook has its roots here!

Oregon is one of the favorite destinations for adventurers in the United States, as the state offers many options for mountain tours and breathtaking natural landscapes. One of these places is Crater Lake, which is considered the deepest lake in the country. The place is inserted in a crater of an inactive volcano and the accumulated water is caused by the melting when the temperatures are warmer.

Accessible only during the summer, the Crater Lake National Park is considered the fifth oldest U.S. park. The tip is to take advantage of the more than 700 kilometers of fully preserved area to camp and enjoy nature.

Oregon is located north of California on the west coast of the United States. Oregon received the nickname “Beaver State” because of the strong forestry at that time. Today, the economy of this state in the West is dominated by technology companies. There were also many Indian tribes in the past, but the number has declined to this day. In Oregon there are 228 State parks with a total area of ​​381 km², which preserve the original beauty of the country.

Salem has 150,000 residents and is the capital of Oregon. While the older tourists are probably more interested in the Mission Hill Museum or the Elsinore Theater, the lavishly designed Salem Skatepark could be of interest to the young visitors. 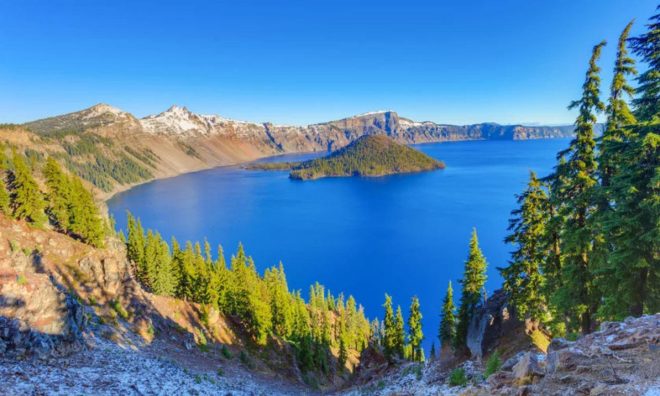