Oklahoma is a state in the United States in the country’s midwest. The name Oklahoma means “the land of the red man” in the native language and alludes to the reddish skin of the Indians. The capital of Oklahoma is Oklahoma City. The city is in the center of the state.

Displaced people, those looking for a home, and a new home in the Midwest – Oklahoma’s story

In the early days of the United States, European settlers saw no value in what is now Oklahoma. The area was assigned to various Indian tribes in 1817. The aborigines came from the east of the young United States and were driven out by the new landowners. Between 1817 and 1830, approximately 50,000 people were displaced to Oklahoma and met indigenous people there.

The displacement of the displaced has gone down in US history as the Trail of Tears.

In order to preserve the Indian territory, the white settlers were banned from settling in this region from 1880. Nevertheless, people always settled in this region, which led to conflicts after some time. In order to prevent the conflicts, the government also released areas for European settlers after a while. The nickname “Sooner State” was created even before the country was released, many settlers founded places and farms here. As if overnight, a run to the countryside in Oklahoma was created and Oklahoma City was created in no time.

In the 20th century, Oklahoma achieved quite a bit of wealth and fortune. Oil and gas reserves were found that brought jobs and capital to the region.

In the 1930s, Oklahoma was badly affected by the so-called “Dust Bowl”. Due to poor and incorrect cultivation of the fields, there was strong soil erosion due to wind and huge amounts of dust formed. The dust worsened people’s quality of life considerably and destroyed much of the harvest. Many people then moved to the west of the country. The migration took place mainly via the famous Route 66.

Oklahoma experienced the worst terrorist attack by local terrorists in the United States in the 1990s. In 1995, terrorists detonated a bomb in Oklahoma near the Alfred P. Murrah Federal Building. Over 100 people died in the attack and children were also affected.

Vacation in Oklahoma – nature experiences for beginners and advanced

Oklahoma largely consists of flat land and wide plains. In the east of the country, the landscape slowly changes to the highlands, large limestone formations dominate the landscape. The Great Plains are in the west. Large areas that are mainly used by agriculture alternate with farms, small rivers and large reservoirs.

Chicksaw National Park was named after the indigenous people who moved here. The park is located in the south of Oklahoma near Sulfur. The area includes many lakes, rivers and forests. Long hiking trails allow hikes where you feel almost alone with nature. In addition to the breathtaking landscapes, the park also includes some historical sites. Many museums and monuments tell the history of the region and the history of the people who lived here and still live today.

But not only this park is very popular with visitors. Oklahoma offers a number of parks, some of which were created for people who are looking for a more comfortable experience of nature. For example, the Sequoyah State Park contains a large golf course that is very popular with national and international visitors.

Oklahoma is located in a unique place: not only because it occupies a position practically in the middle of the United States, but also because of its fascinating mix of North American history, native Indian culture and genuine southern charm. Oklahoma is the state where the largest population of Native American Indians lives, being home to 39 tribes.

Oklahoma City, the capital of Oklahoma, is home to great skyscrapers and architecture that attracts the attention of tourists. Oklahoma City blends the air of a modern city with a rich past and one of its must-see tours is to visit museums dedicated to the memories of the Indians who inhabited the region.

In this vast region of America, the earth is very fertile, and farmers get the most from growing wheat, oats, and corn. That is why the Midwest is also called the “bread basket of the nation”. The farmer families often live very secluded on their lands. The closest neighbor is then miles away. Despite or perhaps because of their hermitage, people in the Midwest have an open, friendly, and honest nature. Here you will find plenty of space for an unforgettable vacation.

The landscapes of Texas, Oklahoma, Kansas, Missouri and Iowa impress with endless expanses, vast plains, huge cattle farms and a few modern cities. A special attraction is the former Indian country: many Indian tribes have found their new home here, which is why the authentic Indian culture is widespread in this region.

Follow Route 66 on its way through the Midwest. This leads through the cities of Tulsa and Oklahoma City. In addition to these two cities, Dallas and Houston are also known. The cities in the region offer their visitors a wide range of culture, culinary delights and shopping opportunities.

Summers are very hot, winters are very cold. It is precisely this temperature difference that makes the region the perfect growing area. For the best travel season, this means that late spring is particularly suitable for trips through the Midwest, because the heat is not yet to be expected at this time. 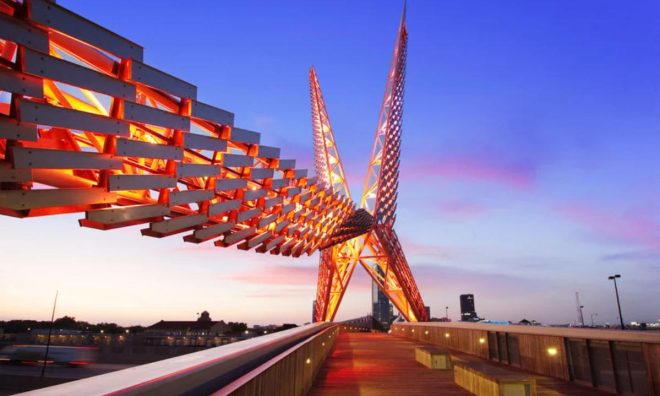