Immigrants and Displaced Persons – A story always has two sides

When the European settlers arrived, most of the Indians who lived here were expelled. Most of them are extinct or live elsewhere today, only the Iroquois still live here today.

The state was founded as a Dutch colony until the area was annexed by the English crown in 1664.

In 1788, New York became the eleventh state to join the thirteen states of the American Union. New York City gradually developed into a large immigration city and metropolis.

The Statue of Liberty arrived in New York City in 1886. As a gift from France to the United States, it should demonstrate the ties between the two countries. After the events of September 11, 2001, the Statue of Liberty was closed for a long time. Since summer 2009 it has been open to visitors again.

Appalachian Mountains, Hudson and Long Island – something for everyone

The state of New York borders the Lake of Ontario in the west. From the interior of the country, the Ontario River flows east into the ocean.

One of the most famous areas in New York is Long Island. Many holidaymakers come here every summer to enjoy the beaches, the sea and the sun.

Most tourists and visitors are drawn to New York City and not the surrounding area. But there is at least as much to discover here.

Famous parks include Catskill Park and Montauk Point Park. The Niagara Falls lie on the border with Ontario ( Canada ). The water falls 58 meters below the surface and creates a tremendous noise.

New York is the largest financial and commercial center and the fourth largest industrial center in the United States. The main destination there is the famous city of the NYC, which is known for its skyscrapers, yellow taxis, plays and incredible signs.

Visiting New York without seeing Times Square is the same as going to Paris without seeing the Eiffel Tower. Filled with shops and restaurants, the great avenues in New York City are full of luminous signs, giving tourists the impression of being in a day even when night falls.

New York City with its skyscrapers and hectic life shapes the image of the state of New York very strongly, but there is still a quiet, rural New York, because the state is very diverse. The capital Albany is in the east.

New York City is the largest and most international city in the United States. The city clearly offers a lot, whether in winter skating in Central Park, Wall Street and Broadway, tons of museums, libraries, restaurants and colleges, as well as numerous sights in the different districts.

But the state is not short of beaches either, because there are a few in Long Island, the best known of which is Coney Island. Many people live in Long Island and are therefore not too far from Manhattan.

Other popular destinations are also some small places in the Appalachian Mountains especially for winter sports enthusiasts, as well as almost the entire state in autumn when the leaves turn into intense colors in the so-called ‘Indian Summer’. 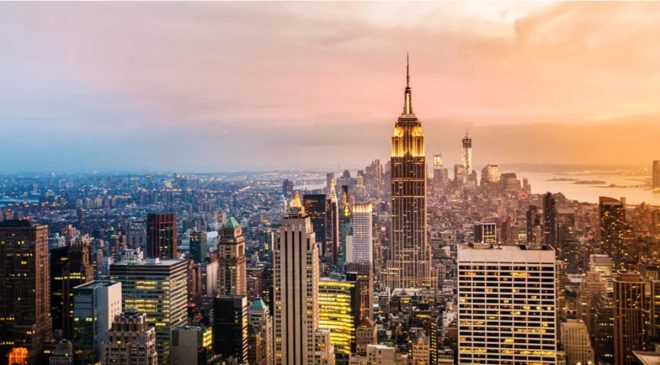