Nevada, also called “The Silver State”, comes from the word origin of Spanish origin and was derived from the word nieve, which means snow in Spanish. The name refers to the snow-capped mountain peaks of the Sierra Nevada. Carson City was chosen as the capital. With 286,351 km² and approximately 2.7 million residents, Nevada is the seventh largest state of all states.

The History of Nevada

Nevada borders Idaho and Oregon to the north, California to the west, Arizona to the southeast and Utah to the east. The Nevada area originally belonged to Mexico. It was only with the Guadalupe Hidalgo peace treaty that ended the Mexican-American War from 1846 to 1848 that Mexico had to cede the area to the United States. All areas ceded by Mexico were merged into the Utah Territory in 1850, where the current states of Utah, Colorado and Nevada can be found.

Large gold and silver deposits were soon found near Virginia City and attracted many gold prospectors and traders to the region. Hence the nickname “Silver State”. In addition to South Africa and Australia, Nevada has the largest gold deposits in the world. In 1861 Nevada broke away from the Utah territory and took on the current name. As the 36th state, Nevada was incorporated into the United States in 1864.

Nevada is largely a country with deserts or a desert-like, dry and hot climate. In summer it gets very hot with well over 30 degrees Celsius. Winters are relatively mild with a daily temperature of around 10 degrees Celsius, but at night it can cool down to minus 8 degrees Celsius.

In the middle and in the north, Nevada is crossed by wide long valleys. The Great Basin occupies most of Nevada. The Great Basin is a steppe-like landscape with stone and sand deserts and mostly dry water courses and salt lakes (including the Great Salt Lake, Utah Lake, Pyramid Lake) crossed by mountain islands and canyons. The sparse vegetation is mostly dominated by sagebrush bushes, pine and juniper trees.

The “Closed Areas” of Nevada

Nevada offers tourists many attractive offers. Above all, the gaming city of Las Vegas, known for its countless casinos. With the legalization of gambling in Nevada in 1931, the city experienced a surge. The Hoover Dam with its reservoir, Lake Mead, is also located here and attracts a large number of tourists every year. For hunting enthusiasts, the largest hunting fair in the United States takes place in Reno every year. Lake Mead and the smaller Lake Mohave offer a range of water activities. There you can also rent boats or canoes. Campsites, but not free of charge, provide accommodation here, and picnic areas are also provided.

The surrounding area is dominated by a desert landscape in which the Mojave Desert (part of the Death Valley, one of the most hostile areas in the world), the Sonora Desert and the Great Basin Desert are located. Despite the poor living conditions, there are a number of interesting animals here, including snakes, lizards, bats and over 200 species of birds. Near Boulder City there is a Visitor Center, where you can get detailed information about the flora and fauna of the region. Guided hikes are also offered.

Due to the many gold and silver discoveries in Nevada, many cities emerged near the sites where the residents left the villages after the boom in precious metals and these became ghost towns. Today some of the abandoned places have become popular destinations. Among other things, Rhyolite, the city founded in 1904, was once one of the largest Nevadas. The open air museum and the “Bottle House” (a house built in 1906 from many thousands of bottles) are the tourist attractions here. Other ghost towns are Aurora, Belleville, Belmont, Broken Hills, Carrara, Bonnie Claire or half-ghost towns like Beatty, Goldfield, Tonopah and Ruth, this place still has about 400 residents. The gold mining town of Bodie, which is relatively well preserved thanks to the low humidity, is on the border with Nevada.

Nevada borders Mexico and is one of the most visited states in the United States. The reason? Because there is the ‘city of sin’ – Las Vegas. There, the casinos are legalized, so the city is taken over by large luxury hotels and their spaces for gambling.

But the destination goes much further: there, you can enjoy the attractions of the desert, eat in good restaurants and famous fast foods and enjoy the sun all year round in the luxurious swimming pools of the hotels. It is true that at one time or another the casinos will be part of the tourist itinerary, but do not think that this is monotonous! 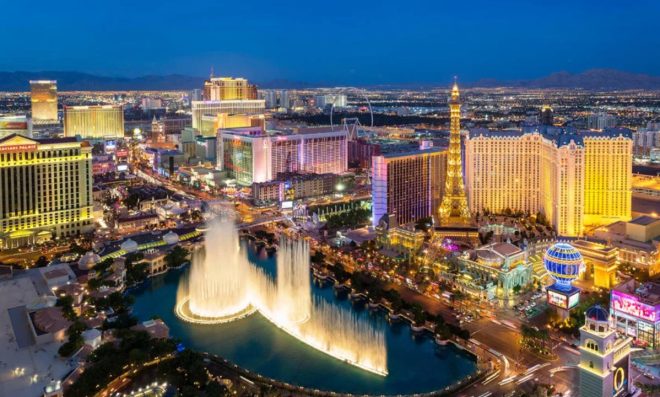