Nebraska is a state in the United States in the Midwest. The state is now closely linked to the image of agriculture. Pictures of Nebraska mostly show large fields, hay bales and large farms.

Agriculture shapes a state – from prairies to large farms

Nebraska is located in the middle of the Great Plains, the area of ​​the huge farms and fields of the USA. The history of the state has always been linked to agriculture. Agriculture has been practiced in these areas since the arrival of the first European settlers. So the prairies turned into fields. The west of the state is often counted to the west of the United States, which is why Nebraska is often referred to as the gateway to the west.

The largest city in Nebraska is Omaha. But Omaha is not the capital of Nebraska. Lincoln takes on this task. Omaha is named after the Indian tribe of Omaha. The river that flows through the city is the Missouri.

Endless expanses – nature as far as the eye can see

At first glance, Nebraska is often mentioned in connection with agriculture and not with untouched nature. But it is not only huge fields that determine the landscape. Over time, more and more areas have been created to protect the original nature. For example, Chadron State Park. The park is particularly popular with ski tourists and hikers.

Many lakes, many rivers and waterways run through the state of Nebraska. One of them is the Platte River. The river flows through the state from west to east and thus divides it into north and south. Platte River State Park is dedicated to the river and its surrounding nature and beauty. The flat banks are particularly suitable for swimming and fishing and hiking trails along the river can be found here.

Not only parks that are dedicated to nature abound. There are also historically oriented areas in a wide variety of locations in Nebraska. One of them, the Buffalo Bill Ranch State Historical Park is named after the famous bison hunter and showman Buffalo Bill. The ranch located here was Buffalo Bill’s home and was built during the time of his successful show. Not only the house, but also the surrounding area belongs to the park and can be visited.

Nebraska has wonders in every direction: vast prairies in the east, majestic canyons and peaks in the west and sand dunes in the middle, making the trip as beautiful as it is fun. The state is also steeped in history, with several opportunities to explore the past of United States.

The Scotts Bluff is one of the postcards of the state. It is a small town that has a huge mountain, which was the route of families who wanted to explore the old west. 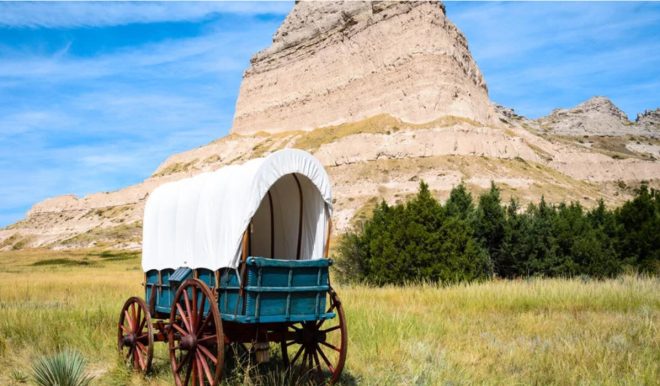