Missouri is a state in the United States and is part of the country’s midwest. The capital is Jefferson City, named after Thomas Jefferson, the third American president. The state is traversed by both the Missouri and Mississippi rivers.

Today’s Missouri, together with today’s Louisiana, was bought by the USA from France in what is known as the Louisiana Purchase. Missouri was an important border area in the American civil war between the northern and southern states. The citizens divided into sympathizers for the northern and southern states and there were always bloody battles. The riots, some of which ended in massacres, depopulated large areas and turned parts of Missouri back into a natural landscape for years to come.

More recently, Missouri’s history has been largely shaped by demographic and economic change. Many cities like St. Louis had to adapt slowly to the new conditions. The agricultural sector became weaker over time, so a lot of building land was freed up in the outskirts of the cities. People moved out of the cities into the surrounding area and the so-called suburbs (suburbs) formed.

In the United States, Missouri is best known for the loose laws related to alcohol and tobacco. In contrast to other countries, the consumption of alcohol was never prohibited here. Even today, many of the laws that are common in other parts of the United States are still missing. For example, it is allowed to drink in public and the sale of alcohol is also looser.

Many areas of Missouri are still sparsely populated and give nature the best chance to thrive as we love it: completely natural. Many national and state parks are dedicated to the unique landscape with its rivers and hills.

The Roaring River State Park is located in the south of the state and is best known for its trout. Fishing is a popular activity among residents and holidaymakers alike, and many places invite you to do so.

The Elephant Rocks State Park in the east of the country is best known for its excellent hiking and climbing opportunities. Various unique rock formations dominate the landscape and put the visitor back in a world in front of people.

In Missouri you can find a little bit of everything, so if you are in doubt of a different place to visit in the United States, the state is the right choice. One of the highlights of the state is that the famous Route 66 passes through, which connects Chicago to Los Angeles.

Saint Louis is very visited, as it is known as the gateway to the American Old West. In this way, jazz and blues are part of the culture, in addition to their cuisine focused on the traditional “barbecue”. The postcard there is the Chain of Rock Bridges, a bridge that cuts across the Mississippi River. 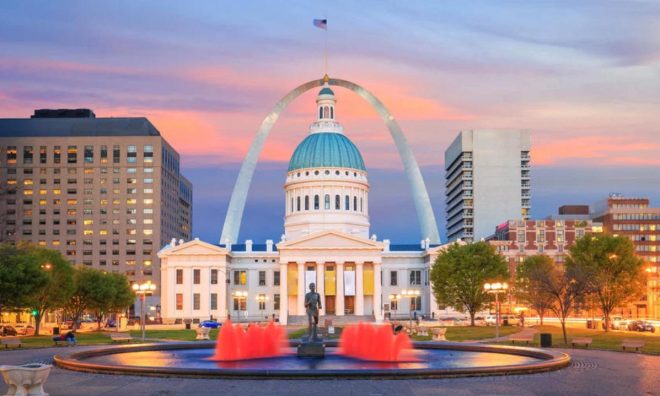