Mississippi is a state in the southern United States. The capital is Jackson. The state is named for the Mississippi River that meanders through the area. Mississippi is cited in many sources as the source of American music. Especially blues are always associated with the state.

The first colonists in this area were French sailors. As a result of several military interventions, the Indians living here were almost wiped out in several conflicts.

In the early days, the area of ​​today’s state was heavily forested. Large areas were cleared to make room for tobacco growing.

An extensive plantation system has been established. A lot of slave trading was done to meet the need for workers for the plantations. After a while, the cultivation of cotton plants became established in addition to tobacco production. The demand for this raw material increased steadily and brought enormous income to the region.

After the ban on the slave trade and the slump in tobacco subsidies, the settlers here were at times threatened by enormous poverty. Due to slave revolts, more and more productions were paralyzed and the changes also took place in the southern United States.

Hurricane Katrina destroyed large parts of the country in the 21st century. The coast was particularly badly affected, but neighboring Louisiana and New Orleans were also badly damaged.

Jackson is not only the state capital but also the largest city in the region. Located in the center of the state, it is the linchpin for business and tourism. The city is named after General Andrew Jackson and has a living history. Located in the southern states, the city has been a center of conflict between the northern and southern states from the beginning. Various conflicts were also fought here later. As well as the US civil rights movement, which led to violent riots in the 1960s. Even today, many museums, monuments and old locations testify to the events of days gone by.

Mississippi has a long coastline on the Gulf of Mexico. In addition to the impressive Mississippi Delta, there are also endless beaches and many beautiful places for fishing and swimming. But it’s not just nature that attracts many people to the south of the state. In addition to Nevada, the second largest gaming industry in the United States has developed here. Facilities such as casinos are spread along the entire coast and are often important sources of income and points of attraction for tourism in a region.

In many areas, the museums and monuments are not only dedicated to nature and history, but above all to famous musicians. Tupelo is a city in northern Mississippi and the birthplace of Elvis Presley. Even today, several institutions deal with the history of the famous artist, such as the Elvis Presley birthplace.

The Tupelo-Elvis Festival, which is held annually in summer, also commemorates the famous son of the city.

Mississippi is not only known for music, beaches and casinos but also for the beautiful nature. Several national parks have been established to protect nature, such as the Natchez Trace National Scenic Trail. This 450-mile hiking trail leads through a former Indian region and shows some beautiful, untouched nature with all its shapes and colors.

Music has a prominent existence in the Mississippi tradition, be it blues, rock ‘n’ roll or country. Known as “The City with a Soul”, Jackson is the capital and largest city in the Mississippi. Located in the center and surrounded by the intersections of Interstates 55 and 20, Jackson can be easily accessed by car, plane, train and bus.

Life in this city is full of music (gospel, blues, rock, jazz, classical, genres, etc). The best place to see all of this is F. Jones Corner, where the blues influence cuts through the walls in the historic Farish Street district. 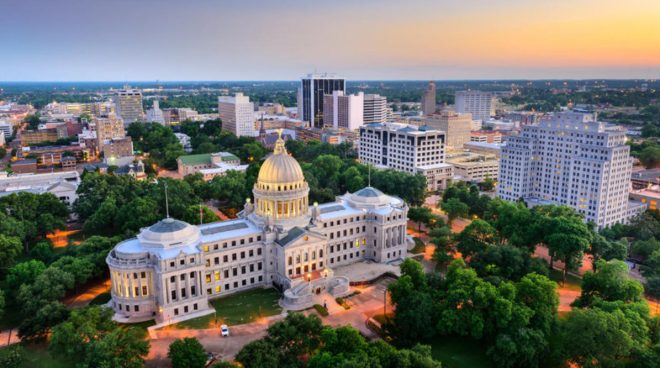