Michigan is a state in the United States and is located in the north of the country. Michigan is especially known for the great vacation destinations on the big lakes and for the strong automotive industry.

A long coast and tranquil islands

Located on the Great Lakes, Michigan has the longest freshwater coast in the United States. Canada is in the north of the country and is only partially separated from Michigan by the lakes. The large lakes include Lake Michigan, Lake Huron, Upper Lake and Lake Erie.

The big cities in Michigan are Detroit and Grand Rapids. There are a lot of islands in the lakes, some of which are very famous. Mackinac Island is one of these islands. The island is part of a national park, the Mackinac National Park. This national park is the second national park in the United States and was founded in 1875. The island is famous for nature and the beautiful Victorian buildings. Cars are also prohibited on this island.

French explorers and cars – a story full of ups and downs

French explorer Étienne Brûlé was probably the first European to penetrate this region. In the British-American War of 1812, British troops occupied the area. At the end of the war, the Americans conquered the area and at the same time drove the Indians out of Michigan. After the Indian resettlement there was an economic boom in Michigan in the 1830s.

In the 20th century, a large automotive industry emerged, especially in Detroit. Throughout the 20th and 21st centuries, there were always crises in industry and the big cities like Detroit were badly affected.

The rural areas are less dependent on industry but more on tourism and agriculture.

Boats, climbing, horse riding and hiking – a wide range of adventures is ready

The Michigan landscape offers everything you can imagine. In addition to the beaches on the lakes, the water not only offers opportunities for relaxation. Michigan is the state with the most pleasure craft. Paddling and sailing are also popular activities for which the large expanses of water are ideal.

Michigan is made up of two parts: the Lower Peninsula, where the main cities are located, and the Upper Peninsula, which is a nature lover’s paradise. One of those places that looks like a picture frame (so beautiful) is Rocks Lakeshore, a national park in the American Lakes region, known for its beautiful scenery and for being a stronghold during the summer.

Hiking, visiting waterfalls, kayaking or boating are some of the options for outdoor activities. It is worth scheduling the trip during the summer, as the region is usually one of the coldest in the winter, since the destination borders Canada.

Whether adventure vacation in the huge forests, water sports, golf, bike tours or mountaineering – the Great Lakes Region is always worth a trip. The seven states of Illinois, Indiana, Michigan, Minnesota, Ohio, Pennsylvania and Wisconsin as well as the Canadian province of Ontario line the shores of the great lakes. A huge region with its own character – both geologically, climatically and culturally.

The states around the Great Lakes offer beautiful landscapes. Huge forests, grass plains, swamps and savannas as well as a rich biodiversity with over 130 rare animal species. But there are also pulsating cities of millions, such as Chicago, Cincinnati, Cleveland and Minneapolis, as well as small sleepy towns that remind of the past. A lot had or started in this region: the Ford company had the first car produced on the assembly line in Detroit, the famous Route 66 begins in Chicago and the huge Mississippi River also springs from this region as a small river.

The seasons in the Great Lakes states are very pronounced: the winters are snowy and cold, the summers are warm to muggy and hot, and autumn transforms the forests into colorful landscapes, the Indian Summer. The months of May to October are particularly suitable for round trips, and spring is the ideal travel time for city trips. 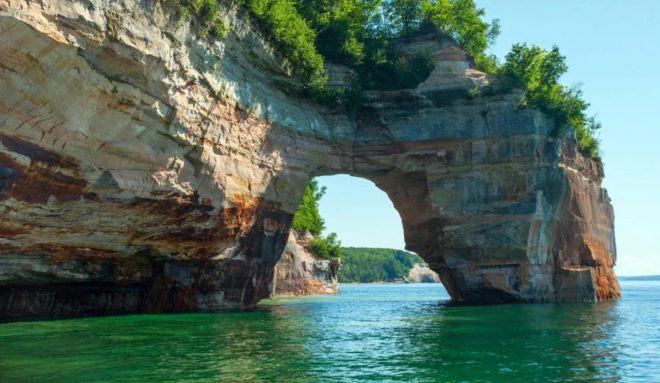