Curitiba has become an object of worldwide attention due to the high level of quality of life achieved by its inhabitants since the 1970s. With a program that served as a model for the whole country, which included the rationalization of transport and the creation of streets of pedestrians and leisure areas, the city has become a pioneer in what has come to be called “urban humanization”.

Capital of the state of Paraná, Curitiba is located at an altitude of 907m above the so-called Curitiba plateau, which is limited to the east with the Serra do Mar. Located on the eastern edge of the Plistocene sedimentary basin, the city presents a topography consisting of wide valleys and some low hills. The climate is subtropical, with annual thermal averages of 17o C and little abundant rainfall (1,077mm annual, on average), regularly distributed. Parana pine (Araucaria angustifolia), isolated or in more or less compact formations, dominates the landscape around the city.

In 1646, the discovery of gold in Paranaguá by the São Paulo pioneer Gabriel de Lara attracted the attention of explorers to the south of the country. With the installation of the cycle of gold and precious stones, several festivals appeared successively in the seventeenth century and the need for an organized administration was imposed. Named administrator of the mines of the southern districts, Eleodoro Ébanos Pereira arrived in the fields of Curitiba in 1649. The village of Nossa Senhora da Luz and Bom Jesus dos Pinhais, the future district of Curitiba, was founded in 1654 and elevated to the category of village in 1693 .

From the 18th century onwards, cattle breeding and trade were decisive factors for the settlement, as they demanded greater sedentary lifestyle. The exploitation of wood and yerba mate also had an impact on the growth of the village, which on August 29, 1853, with the creation of the province of Paraná, changed to the category of city and capital under the name of Curitiba.

The process of population growth in the city and municipality was closely related to European immigration: German since 1833; Italian, in 1871; and, finally, Polish and Ukrainian. In 1876 there were twenty agricultural colonies composed of various ethnic groups, which housed, in addition to farmers, other professionals. The appreciation of northern Paraná as an important coffee producing area, after the second world war, was another fact that was reflected notably in the expansion of the city.

The initial nucleus was developed around the place where the metropolitan cathedral currently stands, located in Praça Tiradentes, which constitutes the urban center, together with Rua XV de Novembro. There are banks, commercial houses, top-class hotels, government offices and main buildings. From that point on, dozens of neighborhoods expand in all directions, many of which resulted from the transformation of colonial agricultural areas, such as Pilarzinho, Portão, Santa Felicidade, Boqueirão and Xaxim.

In addition to its political and administrative functions, Curitiba is the most important center for cultural diffusion and distribution of goods and services in Paraná, as a result of its demographic growth, industrial boom and, mainly, the development of the road system. Connected by road and rail to the Atlantic Lowlands, it constitutes a conurbation with the port city of Paranaguá. It is also in road-rail contact with the central part (Ponta Grossa region) and with the north of the state, where Londrina is the regional hub.

The Curitiba industrial park is the largest in Paraná and is characterized by diversification, with factories for chemical, pharmaceutical and food products, beverages, leather goods and furniture. 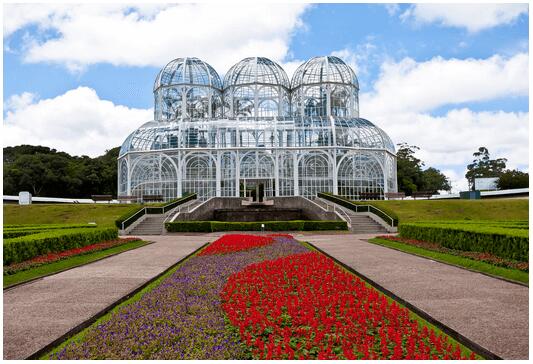