The concept of Aztec is used in different ways and is often misleading. According to what is detailed in the dictionary of the DigoPaul, the term comes from Aztécatl, a concept from the Nahuatl language that mentions the inhabitants of Aztlán.

Aztlán is called, on the other hand, the mythical site that is considered the origin of the Aztatecas or Mexica. There are experts who argue that Aztlán is a symbolic way of representing Mexico-Tenochtitlan, the capital of the Mexica Empire.

Beyond these differentiations, in colloquial language it is common for Aztec and Mexica to be used as synonyms. This is how reference is made to the pre-Columbian civilization that Mexico-Tenochtitlan founded and that became one of the States with the greatest territorial development in the American continent.

Other names by which the Aztec Empire is known are the Tenochca Empire and the Triple Alliance. In more specific terms, it is considered a controlling entity that encompassed the fields of economy, politics and territory, and existed throughout the Late Postclassic period (the final stage of development of the natives before the arrival of the Spanish) in central Mesoamerica.

According to DigoPaul, the name Triple Alliance arose as a result of the empire being formed by three places from which orders were sent to the entire territory, and these were Mexico-Tenochtitlan, Tlacopan and Texcoco. History tells us that most of the territories that were accountable to the altépetl were owned by the Aztecs.

It is public knowledge that the Aztecs excelled in many areas of knowledge, such as the following: metallurgical development; the exploitation of corn, squash and other crops; the use of a proper metric system and a writing based on pictograms; the use of clothing made with feathers, among other characteristics.

Today it is possible to appreciate numerous vestiges of the Aztec culture. The Templo Mayor and the archaeological sites of Texcotzingo and Mixcoac are some of these testimonies.

Regarding the structure of their dominion, both the Aztecs and their allies prevailed over many peoples, mainly in central Mexico, the Gulf Coast and the Guerrero region, as well as certain parts of Oaxaca. As if this were not enough, they had various enclaves in strategic places in Tabasco and they also had under their control the route that connects the Xoconochco region and the heart of Mesoamerica. Taxation was the main means that served the Aztecs to expand their economic control considerably.

At the beginning of the 16th century, the Aztecs were the most powerful civilization in Mesoamerica. Most of the peoples of the region, in fact, were subject to Aztec rule. The Spanish invasion after the arrival of Christopher Columbus to the continent was resisted by the Aztecs, although Mexico-Tenochtitlan finally fell into the hands of Hernán Cortés in 1521.

Currently, the adjective Aztec is used as the equivalent of Mexican. For example: “Aztec striker Chicharito Hernández scored two goals in his team’s victory. “

In Mexico City there is the Azteca Stadium, where sporting events of great international importance are held, with a capacity of around 87,000 spectators; its size places it in second place within the American continent and eighth in the world. Its design was in charge of the architects Rafael Mijares Alcérreca and Pedro Ramírez Vázquez, and the construction work began in 1962 to have a venue where the 1970 World Cup could be played. Currently, in the stadium It is possible to enjoy shows of all kinds, such as recitals and awards ceremonies. 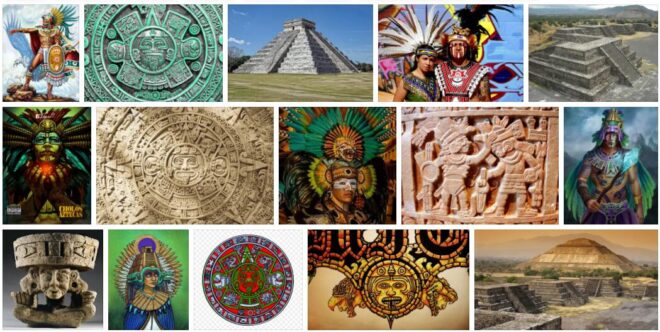