Massachusetts is one of the New England states and covers an area of ​​27,336 km², the capital and largest city of the state is Boston with over 617,000 residents.

The name of the state is derived from the language of the Massachusett and means “at the big hills”. This means the Great Blue Hill in the Reservation State Park. In 1788 Massachusetts became part of the United States.

Massachusetts is bordered in the north by New Hampshire and Vermont, in the west by New York, in the south by Connecticut and Rhode Island. The eastern part is on the Atlantic Ocean.

The Plymouth Colony was founded by the English in 1620 in what is now Masschusett, and it lasted until 1691.

The Boston Tea Party in 1773. Boston citizens poured East Indian tea into the sea as an act of resistance to British colonialism. This triggered the Revolutionary War of 1776, which resulted in America’s independence. An economic upswing followed and Massachusetts became an important industrial location.

In 1780, the Massachusetts Constitution, which still applies today, was passed. Massachusetts was one of the 13 colonies that rebelled against British rule.

In 1788, Massachusetts became the state of the United States.

In 1820, Maine, then part of Massachusetts, split off. The reason was the admission as a non-slave state.

Massachuchetts is a high country and is dominated by mountain ranges such as the Berkshire Mountains and foothills of the Taconix and the Hoosac Ranges and other smaller mountains on the New York border. Only on the approx. 660 km long Connecticut River is the landscape determined by the Pioneer Valley and in the west by the Housatonic Valley. The Housatonic River flowing through there is approx. 240 km long. Mount Greylock at 1,064 meters is the highest mountain. On the Atlantic coast is the approximately 100 km long Massachusetts Bay, which is bordered in the north by Cape Ann. To the south is Cape Cod Bay. Boston is located in the far west of the bay.

The flora and fauna of Massachusetts

Nature in general is very dominant in New England, including Massachusetts. Here you will find large deciduous, mixed and coniferous forests. A tourist magnet is the Indian Summer with its bright colors in autumn. The predominant tree species are maple, oak, poplar, beech and chestnut in numerous subspecies. There are a total of around 800 tree species here. The White Mountains and the Berkshires are particularly worth a visit.

In the woods in particular, you will find wolves, black bears, coyotes, moose, foxes, weasels and various types of lynx. On the coast and inland, many birds have their habitats such as puffins, fulmares, shearwaters, bald eagles, golden eagles, various types of owls and hen harriers. The lakes and rivers are rich in fish.

Whales and lobsters frolic in the coastal waters.

Massachusetts offers a varied landscape with mountains, forests, beaches, islands, lakes and rivers. And there is also a lot to discover in the historical and cultural area.

Massachusetts has 143 state parks ideal for a variety of outdoor activities.

Very good hiking opportunities can be found in the Berkshires and the Blue Hills in particular. The many hiking trails are well signposted with the duration and difficulty of the route. Hiking maps are distributed free of charge in the visitor centers or at the park rangers. The Appalachian Trail is a special challenge for advanced hikers. If you prefer bike tours, you can buy bikes. B. borrow from Boston Bike Tours. Bicycles are also supplied by some rental companies.

Since Massachusetts has numerous rivers and lakes, you have the opportunity for a variety of water sports such as sailing, rowing, fishing, surfing or canoeing, especially on the Connecticut River. For bathers, there are several local recreation areas with lakes and long beaches in the Boston area. Between April and October you can watch whale watching in Provincetown, Gloucester. You can see whales raising the young and playing and eating.

The climate in Massachusetts is not uniform and can be divided into different zones: the eastern part is of a maritime nature with cool, humid summers and mild, humid winters. Towards the interior, i.e. westwards, the temperature differences are greater, the summers are hot and dry, the winters cold and dry. The climate is becoming more continental here. In the coastal region, especially on the bays, windy weather often prevails and hurricanes or tornadoes are not uncommon. Spring in general is difficult to bloom. The best time to travel is from May to October. Especially October because of the Indian Summer.

The state of Massachusetts offers a number of attractions throughout its six main regions. Boston is the capital of the state and one of the most famous destinations in the United States.

One of the must-see spots is Freedom Tail, a kind of trail that passes through the main tourist spots in the city. In total there are 16 stopping points, all indicated by an emblem on the floor.

Herman Melville, the creator of Moby Dick, Dr. Seuss and John F. Kennedy, many eminent people are from Massachusetts. The state is one of the six New England states and is therefore located in the northeast of the USA.

The lifestyle in Massachusetts is wonderful. Since the population is very diverse, you can get to know people from all over the world and from different cultures. The state is best known for its excellent schools and colleges.

Boston is the state capital and also the largest city in New England. The university town is New England’s cultural center and perfectly combines history, a lively nightlife and education. Downtown Boston is particularly easy to explore on foot, with a stroll along the ‘Freedom Trail’ and a visit to the ‘Beacon Hill’ district. On the opposite river bank is Cambridge, which is home to the well-known MIT and Harvard University. 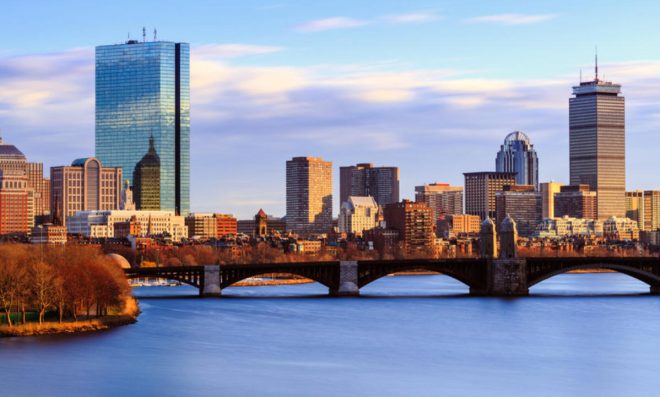