Maryland is located in the middle of the east coast of the USA and is 32,133 km² in size, about the size of Belgium. The name was given by Lord Baltimore, who named the area after the wife of King Charles I, Henrietta Maria. The nickname “The Old Line State” is of military origin. Maryland is also called “Free State” or “Chesapeake Bay State”. The capital has been Annapolis since 1694, while Baltimore is by far the largest city in Maryland.

Maryland is bordered in the southwest by Virginia and Washington DC. To the west is West Virginia of the neighboring state, in northern Pennsylvania and northeastern Delaware. In 1788 Maryland became a state.

The topography of Maryland is very diverse and is divided into several sections, the sandy coastal landscape in the east, the marshes near the coast and the plateau landscape of the forested Piedmont, closely linked to the mountainous landscape of the Appalachian Mountains in the west. The highest elevation in the state at 1024 meters is the Hoye Crest and is located in the Allegheny Mountains. The 50 km long Atlantic coast is very rich in fish and many seabirds have their habitat here. Dunes, mudflats and sandy beaches determine the landscape of the coast. Maryland is very rich in water, 90 rivers make their way through the landscape, especially the Potomac and Susquehanna, the largest of all. In Maryland, agriculture, such as cattle breeding, fishing or soybean farming, plays alongside industry (including electronics, mechanical engineering,

Maryland offers tourists a wide range of sights and activities of all kinds:

Annapolis, the capital on the Atlantic coast. The United States Naval Academy, inaugurated in 1845, is located here. Antitam National Battlefield, the memorial to the bloodiest battle of the Civil War.

Baltimore, the largest metropolis in Maryland. There are many attractions here, including the Basilica of the Assumption, the Zion Church of the City of Baltimore, the Baltimore Museum of Art, the one in the Contemporary Museum. Art lovers get their money’s worth here.

Anyone interested in sports shouldn’t miss the Sports Legends Museum at Camden Yards. Here you can learn everything from the history of sport.

The Cheasapeake Bay is the largest estuary in the USA with 12,000 km² and the meeting point for water sports enthusiasts and anglers. Here you will find a varied landscape consisting of forests, swamps, beaches and sand dunes. Many species of birds such as bald eagles and blue herons populate the area. On the Delmarva peninsula you can even meet wild horses.

Luxury camping at the Savage River Lodge. For vacationers who want to combine camping with comfort, this is the ideal solution. Spacious luxury tents with all amenities await guests here. The nearby Deep Creek Lake is ideal for nature trips, where you can practice all kinds of water sports.

In the Assateague Island National Seashore you will find pristine beaches and interesting marsh landscapes. Along the hiking trails you will encounter wild horses and many interesting animals.

The climate in Maryland, which is due to the different landscapes, is very diverse. In the east of the country there is a maritime climate with hot and humid summers and mild winters. The western part of the country with its mountainous regions is dominated by the continental climate, especially in winter it is colder and wetter here. Plenty of snow falls here in winter. Tropical storms often occur on the coast. The best time to travel is from April to October.

Maryland is known for being a “miniature of the United States” for its diverse landscape, from mountains to the coast of the Atlantic Ocean. The state was the center of military activity during the American Civil War.

One of the must-see places in Maryland is Annapolis, a city that was once the capital of the United States and is super charming. Known for its colorful buildings, the city is full of stories and postcards.

Maryland is located on the north east coast of the United States. Baltimore is by far the largest city in Maryland. Cheasapeake Bay offers all water sports enthusiasts many opportunities for sailing or fishing. Many famous sports teams, such as the Baltimore Ravens or the Washington Redskins, also train here. The coast is lined with tranquil fishing villages and in the west you can admire the beautiful mountains of the Appalachian Mountains.

Annapolis is the capital of Maryland with only 36,000 residents. Although it doesn’t have many residents, it is the home of the United States Naval Academy. But the Maryland State House or the beautiful harbor area are also popular tourist destinations. 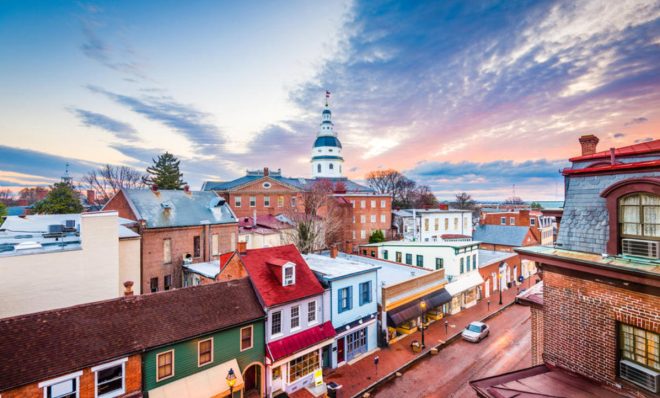