Maine is a state in the United States in the north of the country. Maine borders Canada to the north and west and the Atlantic Ocean to the east. Over 90% of the area is covered by forest, especially pines. Hence the name Pine Tree State.

Thick forests and a wild coast

The entire northern Maine line borders Canada. Much of the state is covered by forest. The Atlantic coast is a rough but tranquil area with a world famous scenery along the rocky coast. The combination of forests and the beautiful coast attracts many tourists.

The state is sparsely populated. Maine is the easternmost of all states. The strong influence of the last ice age can be seen in the fjord Somes Sound or the formation Bubble Rock. The region belongs to New England, a region that, in addition to Maine, also includes the states of Connecticut, New Hampshire, Massachusetts, Rhode Island and Vermont.

The Acadia National Park is the only national park in New England.

Contested Area – On the border between the English and French

The region around and in Maine was traveled by Europeans relatively early. John Gabot traveled the country as early as 1497 and laid the foundation for the later claims of the English.

However, the first European settlers were French. From then on, Maine was a very competitive area between the English and the French.

After independence, Maine was only part of Massachusetts until it became a separate state in 1820.

The thin population and the beautiful landscape make Maine a perfect place for a nice outdoor vacation. In summer, the wide beaches offer a beach vacation that is not characterized by tropical palm trees. In contrast to the south, it is quite easy to find an abandoned beach here that is not overrun by tourists.

The lakes and the coast offer nice opportunities for anglers, paddling and also sailing along the coast is possible. Large forest areas invite you to camp.

Nature doesn’t just attract people. Rare and impressive animals can also be seen again and again. Rare bird species rest on the lakes, rivers and clearings attract moose. Whales can also be spotted on the coast.

The Maine is the largest state in New England, the name given to the northeastern United States. The state has an extensive coastline, as well as beautiful mountains and views of the sea. Portland, the state capital, is the small town of Cape Elizabeth, a true charming destination.

In Portland, there is the famous Portland Lighthouse, the oldest of Maine’s 65 lighthouses, which remains in operation today. Many tourists, especially professional photographers, love to record the sunset on the spot.

Maine is located on the northeastern tip of the United States. More than 60 lighthouses line the 3,500 km long coast. If you drive this along you can see countless fishing trawlers that supply the entire USA with seafood. The famous Maine lobster is a delicacy for residents and tourists alike. Since more than 90% of the dense forests of Maine are made of pine, this state is also called “Pine Tree State”. Unique national parks, wide sandy beaches and historic buildings give this part of the east coast a special light.

The main natural attractions are Acadia National Park and Baxter State Park. Maine is also known as the ‘blueberry’ state because 99% of all US production comes here. 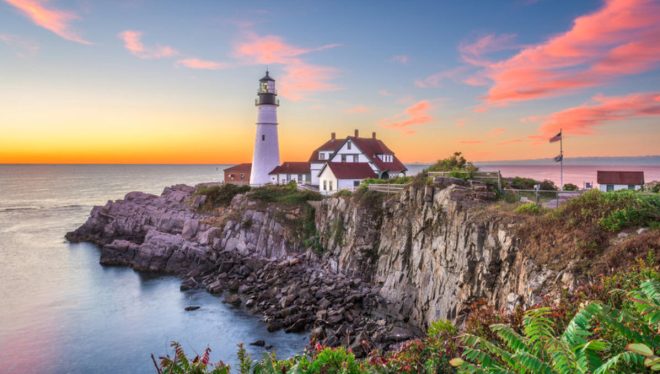