Louisiana is a state in the southern United States on the coast of the Gulf of Mexico. The largest city is New Orleans and the most famous river is the Mississippi, which flows into the sea here. The heraldic bird of Louisiana is the pelican, hence the epithet Pelican State.

In the north of the country there is a higher area, which is not characterized by swamps. The highest elevation here is Driskill Mountain at 163 m above sea level.

Louisiana’s coast is suffering from severe erosion. The beach is removed here faster than in many other places in the world. Due to this phenomenon, more and more people have to leave their old places of residence and move to the hinterland. Scientists state that this phenomenon is primarily related to rising sea levels.

The weather in Louisiana is characterized by subtropical climate and storms. The area is repeatedly hit by hurricanes. A major disaster was caused by Hurricane Katrina in 2005. Large parts of Louisiana were destroyed, and New Orleans was also badly affected.

Louisiana’s capital is not New Orleans but the northern Baton Rouge. The city is much smaller than New Orleans, but is still the second largest city in Louisiana.

The Spaniards were the first Europeans in the region. Hernando de Soto explored the region for the crown. France occupied and claimed the area and named the colony Louisiana after its king Louis XIV.

The United States acquired the area in the Louisiana Purchase and thus expanded significantly. In the civil war, the state belonged to the southern states. Many plantation owners were positive about slavery and fought to maintain the old order.

Louisiana produced many famous people. Louis Armstrong was born in New Orleans in 1901. The city is considered the cradle of jazz. Other celebrities include Reese Witherspoon and sisters Britney and Jamie Lynn Spears.

Louisiana has a multicultural and multilingual history, influenced by the people who make up the population of the state, which is made up of people from France, Spain, Haiti, the French region of Canada, the Caribbean, Africa and Vietnam. The best place to see all of this is the city of New Orleans, the state’s top destination.

They say it was from New Orleans that jazz originated, so musical style rules the city. The French Quarter is the main tourist spot, formed by colorful houses with balconies that remind a lot of the Caribbean and its colonial style.

Embark on a journey into the history of the southern states and immerse yourself with all your senses in the flair of history that has shaped the states to this day.

The southern United States is characterized by historic cities that remind of the time before the American Civil War, romantic plantation houses, mysterious swamps and last but not least great beaches and world-famous attractions and sights.
History buffs will get their money’s worth here and can go back in time on their journey through the southern United States.

The southern states of the USA: who doesn’t think of “Gone with the Wind” and “Forrest Gump”, of Martin Luther King jr. and Elvis Presley. And as diverse as the above-mentioned terms are, the associated states are also very varied: North Carolina and South Carolina, Georgia, Alabama, Mississippi, Tennessee, Kentucky, Arkansas and Louisiana.

Nature offers wild swamps, rugged mountains, lush meadows and lonely beaches, as well as the most visited national park in the USA, the Great Smoky Mountains National Park. Of course, one must not forget the Mississippi, the “Ol ‘Man River”. The southern states are characterized by historic cities that remind of the time before the American Civil War and you can find many romantic plantation houses. Particularly noteworthy are Charleston, a beautiful antebellum city and also called “Grande Dame” of the Old South, and Natchez, where you can find many antebellum residences from the early 19th century. Blues, rock’n’roll and country music performed from Memphis, Nashville and New Orleans from their triumphal marches. Graceland, the home and final resting place of Elvis Presley, is just one of the many sites that testify to the region’s great musical history.

The prevailing climate in the southern United States is subtropical to tropical. Summers are long and hot and the humidity is very high. Heavy snowfall can occur in winter. It is therefore advisable to explore this diverse region in spring or autumn. 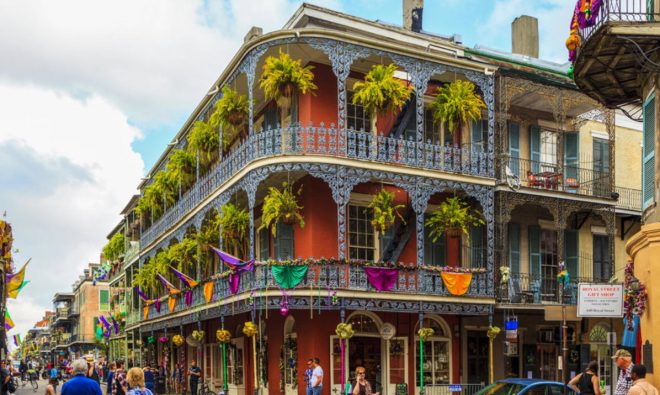