Kentucky received the nickname “The Bluegrass State” because of the blue flowers that bloom on the grasslands in spring. Kentucky, 104,659 km², was once part of Virginia and became the 15th state in the United States in 1792. The name Kentucky is of Irokesian origin and means freely translated meadow or in the field. Kentucky wanted to remain neutral in the civil war, but was attacked by the southern states, causing many to fight alongside the northern states.

Today Kentucky is one of the southern states. The state, officially The Commonwealth of Kentucky, is bordered in the north by Illnois, Indiana, Ohio, in the west by West Virginia, in the east by Missouri and in the south by Tennessee. The capital of Kentucky is Frankfort. Kentucky is the only state with Kentucky Bend an exclave, it is a 68.3 km² (of which 45.5 km² land) large peninsula on the Mississippi River.

The geographic structure of Kentucky

Kentucky has a different landscape structure. In the north is the bluegrass region, where cattle are primarily grown and hemp, tobacco and grapes are grown. The Cumberland Mountains are a mountain range in the southeast and belong to the Appalachian Mountains. South of the bluegrass region is the Knobs, a hilly low mountain region. The Cumberland Plateau in eastern Kentucky is a plateau on the western edge of the Appalachian Plateau. The Pennyroyal plateau with its coalfields stretches to the west. The Pennyrile, as it is also called, is a karst landscape with caves and hills. To the east are the Eastern Coal Fields, a rugged, wooded mountain region crossed by many rivers where coal is mined. There is also the Black Mountain in Harlan County, the highest mountain at 1292 m. The entire state is traversed by a large river network such as the Ohio, Green River, Tennessee River, Cumberland River or Big Sandy River.

Kentucky has a very lively nature. In the woods and in the parks you will find croissants, muskrats, possums, marmots, raccoons, deer, elk, foxes and also a large variety of birds such as red cardinals, mockingbirds, bald eagles, woodpeckers, wren, juice lickers and kingfishers.
In woody Kentucky you can find maple, birch, oak, hemlock, horse chestnut, cedar, pine, walnut and cypress trees. In the Cumberland Mountains alone there are about 30 tree species. Of the smaller plants, you can find blueberries, tulip trees, rhododendrons, goldenrod and mint, which determine the landscape.

Kentucky has a subtropical climate with abundant rainfall (over 1100 mm on an annual average). Summers are very warm with over 30 degrees Celsius, winters cool with just under -5 degrees Celsius on average. Winter is very snowy, especially in the mountain regions. In spring, especially in May and autumn, the temperatures are the most pleasant and recommended as a travel time. Storm systems move across Kentucky between March and September.

Activities and places worth seeing

The range of leisure activities in Kentucky is quite large. Extreme athletes and hikers, cyclists, riders, canoeists, nature lovers or anglers get their money’s worth in the numerous recreational areas and parks such as Cumberland Falls, the Red River Gorge canyon system, the Mammoth Cave National Park or the Daniel Boone National Forest. For music lovers, a visit to one of the music bars where country music is played is essential. Especially since country music is part of Kentucky’s musical culture.

Also worth a visit is Louisville, Kentucky’s largest city with almost 600,000 residents. Louisville has a lot to offer and there is a lot to discover: here is the home of the famous Kentucky Derby, the horse race takes place annually on the first Saturday in May. Other highlights include the JB Speed ​​Art Museum with 12,000 exhibits, the annual Kentucky Shakespeare Festival. A paddle steamer ride on the Ohio River or a visit to Fort Knox Fort, now the United States’ gold reserve. Old Louisville attracts with beautiful Victorian buildings. A trip to the Center for the Arts, an art museum, is also worthwhile.

Lexington, with 270,000 residents the second largest city, is no less attractive than Louisville. At any rate, a visit is indispensable for equestrian fans. In Kentucky Horse Park you can experience the long tradition of horse breeding and equestrian sport up close. There is an equestrian center with hall of fame, museum and a walking farm tour where you can watch the work of farriers and crockery makers. There are also opportunities for horse rides and carriage rides. There are many horse races in the area. As in Louisville, there are some interesting historic buildings worth seeing. Once a year, the Festival of the Bluegrass takes place in Lexington, which should not be missed. You should also visit the Old Kentucky Chocolades.

The Kentucky is known as the state of multiple cultures. One of the curiosities of Kentucky is that the bourbon drink, is known as “the United States’ original distillate” and Kentucky’s most famous export product. A must-see place is the Mammoth Cave National Park.

Mammoth Cave National Park preserves the largest known cave system in the world. The park attracts thousands of visitors looking to explore more than 600 kilometers of caves. It was from these vast chambers and complex labyrinths that the park inherited its name: Mammoth (“Huge”). 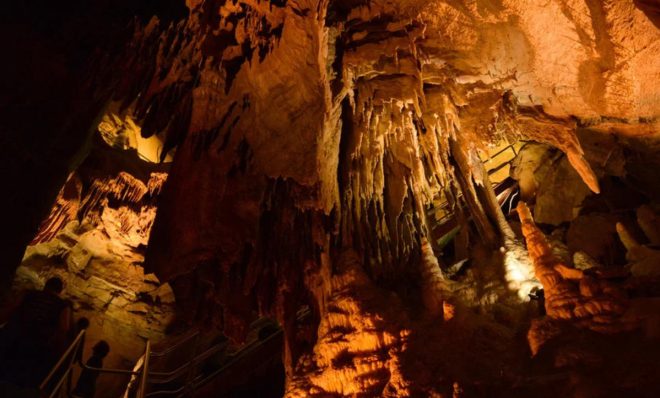