Kansas is a state in the United States in the Midwest. The name Kansas comes from an ancient Indian language and means people of the wind. The capital of Kansas is Topeka and is in the center of the state.

The Midwest – Great Plains and the Kansas River

Kansas is the geographic center of the United States. In Kansas, the Pacific and the Atlantic are equally far apart. Kansas is characterized by the continental climate and the Great Plains, the most important agricultural region in the USA. The region is riddled with rivers. The largest and best known of them is the Kansas River.

Before the agricultural development, the region was a prairie area with large herds of buffalo. The buffalo herds have disappeared today and the area is used to grow wheat and breed cattle.

There are many tornadoes in the flat area. Again and again there is severe damage to buildings and people.

The region is affected by soil erosion due to agriculture. Again and again there are sandstorms and soil loss due to wind erosion.

Buffalo herds and agriculture – history is shaped by people

Due to the favorable landscape, the area has always been inhabited by people. The Indians who settled here before the Europeans hunted buffalo. A picture as we know it from old Wild West films.

The Spaniards were the first Europeans to travel to this area and they brought horses with them. The horses led to immigration from other Indian tribes. French also showed interest in the area and opened it up with the help of trading posts. The area was awarded to the United States
through the Louisiana Purchase. For some time the area was used to house displaced Indian tribes here. It was not until 1854 that Kansas was allowed to be populated by Europeans, and some areas are still reserves for the old Indian tribes.

Slave trade on the border between north and south

Kansas was a border area from the start. Here the supporters and opponents of the slave trade met. There were several battles in Kansas during the Civil War. Not only the north and the south came together here. The Indians also increasingly resisted their oppression and attacked military posts. The Europeans fought back with military actions.

Prohibition was decided here as the first state. The alcohol ban was in force from 1881 to 1948. In the 20th century, the region was hit by the Spanish flu, more than 5000 people died.

In the late 20th century, Kansas repeatedly made the headlines due to various attempts (partially successful) in schools to no longer teach evolution.

Kansas nature and the history it is associated with is preserved in several national parks and natural monuments. The Brown v. Board of Education National Historic Site and the Tallgrass Prairie National Preserve.

Kansas is not a very popular state for tourism, but that does not mean it should be left out of the list of “must-see places” in the country. Kansas City, the capital of Kansas State, which does not host winter games, is not the stage for major festivals, nor is it home to major celebrities. The grace of knowing the place is precisely the lack of striking features, since the place presents itself as a typical American city, ideal for those who want to know the “real” United States.

If you go there, be sure to go to jazz shows, very famous in the state. The destination is right on the border between Missouri and Kansas, so the city is split in two – but the difference between them is barely noticeable. Just in case, get to know the two parts.

The Kansas is sparsely populated. Most of the residents come from Europeans and here in particular from German-born immigrants. Kansas was one of the centers of German immigration and until the last century there was a German newspaper (such as the Kansas newspaper) and many German-speaking communities.

At the latest after the First World War, however, the speakers of German dialects such as the Pennsylvania Dutch increasingly assimilated, so that today only smaller religious groups such as the Amish and Mennonites can speak in this dialect. Many places were founded by German settlers and still bear German names such as Dresden, Hanover, Liebenthal and Humboldt. Since 2003, Ellis County has also been officially called ” German Capital of Kansas “, emphasizing the German culture and origins of many of its residents.

Events and festivals take place here all year round, such as the Midwest German Oktoberfest with beer and polka music.

Minorities in the state are also an increasing number of Hispanics and African Americans, as well as some Asians and indigenous people. The greatest religions are the Catholics, Methodists and Baptists.

Kansas is one of the United States’ Bible Belt, politically people tend to think conservatively and support the Republican Party, but there are also a few democratic cities and regions here.

Kansas received worldwide attention when evolution and intelligent design (creator theory) were to be taught as equals in biology. As in other states of the Bible Belt, there are forces that regularly strive to incorporate the religious-Christian aspect of science into the education system.

The Spaniard Vasquez de Coronado came to what is now Kansas in 1541, which was then still inhabited by the Indians. But for a long time the Europeans had little interest in the country. It was not until 1724 that the French had a post built on the Kansas River.

It was not until 1803 that Kansas came to the United States from the French after the Louisiana Purchase. For a long time, Kansas was just a transit country for the settlers heading west and Pacific. For a long time, attempts were made to settle various displaced Indian tribes here, as in Oklahoma, which meant that Europeans were not allowed to settle here for a long time.

In 1854 Kansas and Nebrask became U.S. territories. From then on there was a significant increase in population, some places were also economically favored in their function as supply posts for settlers moving west. However, the situation in Kansas was tense and until today this bloody phase is called “Bleeding Kansas”. Kansas was particularly controversial on the slave issue, and shootings and raids on settlements occurred regularly.

In 1861 Kansas became a U.S. state and banned slavery. After the civil war (1861 – 1865), the further expansion of the railway line advanced the development. Agriculture is still economically dominant. Kansas, with its immense wheat production, is considered the nation’s bread basket. Maize is also grown and, as the second largest beef producer in the state, cattle farming is also an important industry. To try a juicy steak or a hamburger from the region is highly recommended.

The American explorer Pike said about Kansas that it was just a “great desert. For this reason, an order came from Washington DC to set the land back as a settlement area for the Indians. New arrivals shouldn’t be let through at all. This was of no use, however, because a few years later white settlers remained in the region and made demands on the land. At the same time, however, the dispute over the slave question flared up and there were bloody clashes that culminated in the town of Lawrence being burned down by William Quantrill in 1863.

The upswing came after the war and numerous railway lines were built. It also happened that Kansas became the target of the many Texas herds of cattle. After the war, many former slaves came to the state hoping for better living conditions. The country was good for growing crops, but the weather often didn’t play along. The crops were repeatedly destroyed by storms or there was simply no rain. In 1929, the farmers sought their luck elsewhere.

Although Kansas lost a large part of its rural population, the center for aircraft construction also developed in Wichita and thus created many jobs. Kansas is in Tornado Alley. This is the part of the United States where tornadoes develop. In 1966, 59 tornadoes occurred within a few days. A total of 18 people were killed and Topeka was almost destroyed. 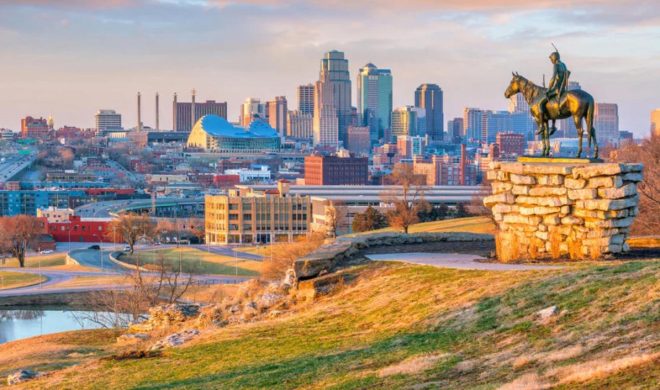