The 145,743 km² “Hawkeye State” Iowa is located in the midwestern United States. The name comes from an Indian chief of the Sauk Indians, Black Hawk. Iowa became the 29th state in the United States on December 28, 1846. It was not until 1830 that the area of ​​what is now the state was populated by whites and went to the United States from the French in the same year. Its neighboring states are in northern Minnesota, western Nebraska and South Dakota, southern Missouri, and eastern Wisconsin and Illinois.

Iowa is rural with a few major cities. The capital Des Moines with 205,000 residents, the largest city, Sioux City and Cedar Rapids are the exception. Iowa has a special honor in the presidential primaries: The first elections are traditionally held in Iowa. The predominant economic factor here is agriculture. Mainly corn, wheat, soybeans and potatoes are grown here. Iowa is also a center of pig breeding.

The geographic structure of Iowa

Iowa is characterized by the extensive agricultural areas. The landscape itself is hilly with little height differences. Hawkeye Point is the highest point at 509 m. The landscape on the Mississippi River in southeast Iowa is very flat. Only a few lakes created by nature, such as Spirit Lake or Lake Okoboji in the northwest, break through the landscape. Iowa was originally a prairie landscape, but 90 percent of it is used for agriculture. Despite the large agricultural areas, natural landscapes such as the Effigy Mounds National Monument on Mississippi can also be found here. What is special here are the prehistoric, numerous artificial hill structures created by Indians.

The climatic conditions in Iowa

The climate in Iowa is continental influenced. In summer it is determined by warm and humid air masses from the south, while in winter polar air masses determine the climate.
In spring the air warms up slowly and it only gets pleasantly warm in May. In summer it gets very hot from July with over 30 degrees. Autumn is cooler, but is still pleasant from September to October. Winter is very cold with temperatures of 20 degrees minus and can drag on until April. It rains most often in late summer. Tornadas can occur in western Iowa in May or June. Blizzards can appear in winter. Seen over the year, the climate is very rainy with up to 2,000 mm. Due to the summer heat, however, there is often drought in July / August.

The capital Des Moines in particular has a number of sights to offer: The city’s Capitol with its gold-plated dome (State Capitol), located on a hill from where you have a panoramic view of the city. There is also a monument to a pioneer here. The Des Moines Art Center, an art museum where paintings, sculptures and mixed media are exhibited. The open-air museum Living History Farms is also worth a visit, where life in the countryside has been recreated over the past centuries. Other interesting places: Gray’s Lake Park, Principal Park, the Blank Park Zoo or the Adventureland with many activities for the whole family.

The university town of Sioux City is also worth a visit. Parks, green areas, golf courses or the Sergeant Floyd Monument in memory of Charles Floyd, who was the only one killed in the Lewis and Clark expedition.

Dubuque also attracts many tourists. Here in the three-state corner on the Mississippi you can experience the famous river up close. The city itself attracts with many historic buildings such as the County Courthouse, a judicial and administrative building from 1891. For nature lovers there are recreation areas and nature parks such as the Ledges State Park, where you can hunt, fish and go boating.

Located between the Missouri and Mississippi rivers and near to major cities in the Midwest, Iowa is a destination off the beaten track, with spaces as far as the eye can see. Des Moines is the capital and largest city in the state, and the strong point there is art, since there are several spaces and sculptures spread over its 213 square kilometers. 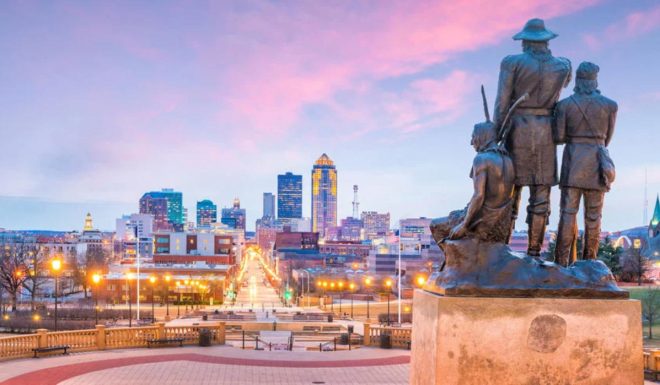