Indiana, the state name means translated The Land of the Indians. The state is located in the midwestern United States, east of Illinois. Like Illinois, Indians are located south of Lake Michigan.

Indiana is characterized by a flat, wide landscape. Lake Michigan is in the north and many other lakes and rivers run through the country. The well-known Wabash River is one of the largest free flowing rivers east of the Mississippi. The Wabash River is Indiana’s official river.

Indiana’s climate is very continental, which means warm summers and relatively cold winters. Snow also falls in winter. The climate and rainfall are not negligibly influenced by the large lakes in the north of the USA.

The state’s capital and largest city is Indianapolis. The city is located in the center of the country and was founded in 1821.

Another famous city is Gary. The city lies on the border with Illinois and belongs to the Chicago metropolitan area. The city has spawned a number of celebrities. The best known is Michael Jackson, who was born here on August 29, 1958. The city was his family’s hometown.

A story full of nature and changing residents

Long before the Europeans settled here, various Indian peoples lived in this region. These are the Delaware, Miami, Potawatomi, Shawnee and Wea Indians. In the Indianapolis area of ​​Miami and Lenape Indians. However, they were distributed before 1820. The French were the first Europeans to arrive in this area. Like many other northern areas, Indiana fell to the British later in history.

The area was hardly used by the settlers and was almost uninhabited for a long time. When the Indiana Colonization Society was created in 1829, the area was selected to create a new home for African-Americans. In the meantime, some of the historic buildings from that time have been declared National Historic Landmarks.

Indiana offers tourists the attractions of American culture, in the heart of the country’s Midwest. One of the must-see places there is Parke County, known for being the “covered bridge capital of the world”.

The place is home to no less than 31 covered bridges, filled with stories, architecture and beautiful outdoor landscapes. One of the must-see spots is the Mansfield Covered Bridge during the Covered Bridge Festival, one of North America’s best autumn festivals. 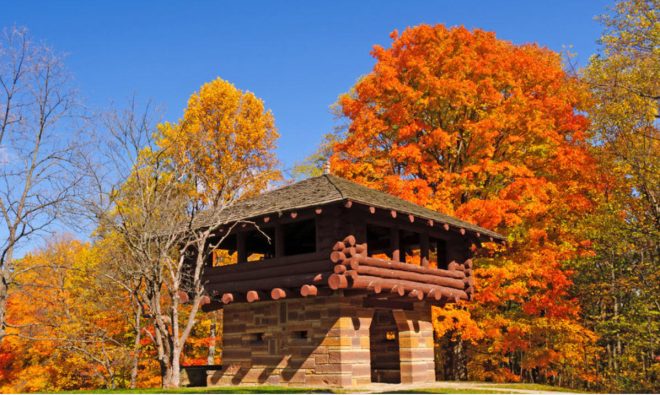