Illinois is a state in the US Midwest. Lake Michigan is to the north of the state. The capital of Illinois is Springfield. Chicago, the third largest city in the United States, is Illinois’ only city of over a million. Illinois received the nickname Land of Lincoln after Lincoln was elected US President. He lived here since he was 21. Although he was murdered in Washington, he was buried in the state capital.

From 7500 BC BC through Lincoln to the Chicago Metropolitan Region

Illinois settlement history dates back to 7500 BC. BC back. The tombs of the Mississippi culture can still be visited today. They are UNESCO World Heritage Sites. Like many areas of today’s USA, Illinois was first French and later British territory.

As in many other areas, the Indians were sometimes violently driven out. After the construction of the railroad and the connection to the national transport network, it caused a high settler flow.

Shortly before the civil war, Lincoln became president. He had lived in Illinois for some time and the state remained loyal to the Union through the war. Slavery was previously banned here.

In the 19th century, Chicago became an important trading city. Many railway lines cross here and the favorable location on Lake Michigan accelerated the process.

Located in the midwestern United States, Illinois is bordered on the west by the Mississippi. In the south, the state is bordered by the Ohio River. Illinois is riddled with rivers throughout. The flat terrain shapes the entire state. This helps to ensure that many streets, paths and canals are laid out accurately.

Many rare animals feel very comfortable here. The special, unique landscape with its rivers is a perfect territory for many bird species. Eagles can be observed in several areas. Those who have no bird watching experience can book one of the popular tours to the best observation points.

Various parks and reserves are dedicated to nature conservation. Buffalo Rock State Park and the Cache River State Natural Area are just two of the many protected areas.

The state was named after the indigenous tribe of Illinois, orini. It was discovered in 1673 by the French Louis Jolliet and Father Jacques Marquette. Her compatriot La Salle built Fort St. Louis in 1692. In 1763 the country was ceded to England and in 1778 it was annexed to the United States.
The capital is Springfield, a provincial town unlike Chicago. US President Abraham Lincoln moved to Illinois in 1830 and gave the state the nickname ” Lincoln Country “. Illinois has approximately 11 million residents. Pigs, corn, milk and coal are the country’s main products.

The mostly flat and agricultural state offers holidaymakers in the south an interesting landscape with a high proportion of forest and many rivers and streams. The north has a small part of Lake Michigan, there are bathing resorts and the offshore islands are a popular destination. The two largest rivers, Illinois and Mississippi, are also worth a visit.

Summers are dominated by hot temperatures, in contrast to winter, which gets very cold here. Spring and autumn offer pleasant temperatures and are therefore the preferred travel times.

The cultural center of Illinois is of course the third largest city in the United States, Chicago. Over 2.7 million people live here. If you include the Chicago catchment area, you can even get almost 10 million residents. The capital of Illinois, however, is the much smaller Springfield.

Chicago impresses with its extensive cultural scene and the interesting architecture of the buildings. There are also plenty of shopping opportunities. Springfield is known for its Abraham Lincoln Presidential Museum. There, in a lively and captivating way, an insight into the life and work of the 16th President of the USA is given. Lincoln lived in Springfield for many years, where he also opened a law firm.

Illinois is the most inhabited state in the United States and attracts thousands of tourists every year. The destination is known for its well-marked seasons – during the summer, there is a lot of sun and heat, while during the winter, snow completely dominates the city. Chicago is the main attraction of the state as it is one of the largest cities in the country.

Chicago’s postcard is Millennium Park, home to Could Gate, by artist Anish Kapoor. The sculpture, which looks more like a bean, attracts curious eyes and yields countless cool photographs. Enjoying every second through space and throughout the park is one of the favorite tours for tourists.

Illinois is located in the midwestern United States and borders on Lake Michigan in the northeast. Campfires, corndogs, arguably the best pizza in the US, and more can be found in Illinois.

The capital city of Illinois is not the metropolis of Chicago, as many may think, but Springfield, which in comparison has only about a twentieth of the population of Chicago. Chicago, home to Al Capone, is the third largest city in the United States and, for many Americans, ‘the’ city par excellence. The universities in particular are very good, there are over 70 museums, more than 6000 (!) Restaurants and 8 pro sports teams for sports fans.

Springfield is located between Chicago and St. Louis and is still rich in western charm and lovable people.

In Illinois, summers can be very hot and winters bitterly cold. The state is mostly flat and characterized by agricultural landscapes, but is one of the most densely populated states. 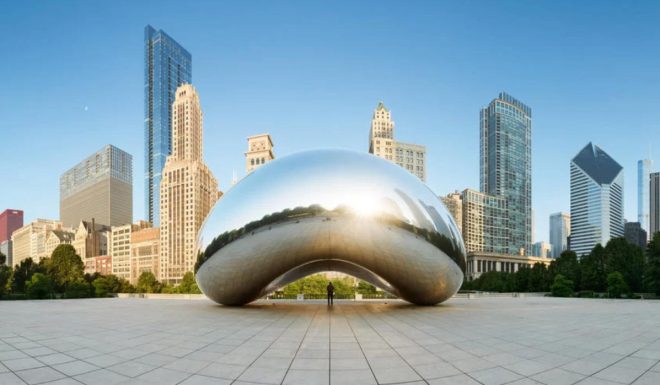