Lewis, Clark and the Rocky Mountains

In the 19th century, the area of ​​what is now Idaho was explored by Lewis and Clark. The first settlers in this region came because of the fur trade and in transit to the California gold rush. Few people settled here. It wasn’t until 1866 that gold was found here that more and more people came to Idaho to find their luck.

There was a war with Nez Percé Indians at the end of the 19th century. The Indians were finally driven out of the area. Idaho joined the United States in 1890. After that, mining became an important industry in this region. At that time a lot of lead and a lot of silver was exported from this region.

Idaho’s landscape is particularly mountainous in the north. The Rocky Mountains dominate the landscape. The many rivers and the mountainous country create many valleys, waterfalls and canyons. Many of them can keep up with the more famous specimens such as the Grand Canyon or the Niagara Falls. Several national parks are also dedicated to the beautiful landscape. The Yellowstone National Park, the City of Rocks, the Hells Canyon and the Craters of the Moon Monument are just a few examples.

Idaho, in the northwest of the country, is considered a very suitable state for nature lovers, since its cities share space with spectacular places. It is the right itinerary for those who want to enjoy great attractions without having to go to cliché places. But few know there are waterfalls bigger than Niagara Falls! We’re talking about the Snake River, one of Idaho’s postcards.

The Snake River forms a large part of the Idaho border and, in addition to an impressive view, also provides leisure for visitors. Walking and fishing along the river are some of the most practiced activities. For those who like beautiful landscapes, it is worth going to the lookout, which provides a view of the cabin from the waterfalls.

Although the Idaho is relatively far from the Pacific (approx. 560 km), the balancing influence of the sea on the climate is still noticeable. Summers are hot, but the dry heat is bearable. Winters tend not to be as cold as in other more central U.S. states. However, there are regional differences due to the different altitudes.

Livable metropolis Boise and the Yellowstone

Well-known universities are Idaho State University, Boise State University (the largest in the state) and the University of Idaho. The name of the city Boise comes from the French (boisé = forested) and therefore the city is often referred to as the city of trees. The city has grown rapidly in the past twenty years as many Californians have moved there. The city can be reached via the airport as well as via the transport network.

There are numerous recreational opportunities in the Greenbelt along the banks of the Snake River. Rock climbers will feel comfortable in the Asana Climbing Gym. The State Capitol is just as worth seeing as the Idaho Historical Museum in Boise, where you can learn more about the history of the state. If you are in the city, you should also visit the Saturday market.

A special museum has also been dedicated to immigrants from the Basque Country. In the north of the city you can go on beautiful hiking and cycling tours. You can also visit the Boise Zoo and the Idaho Aquarium. A trip to the nearby World Center for Birds of Prey with numerous birds of prey (including the rare California condor) is also recommended. Skiers and snowboarders should head to the Bogus Basin Ski Area in the northeast of the city.

In general, sports fans will get their money’s worth in Boise, because here you can visit ice hockey, basketball and baseball games in the stadiums. University sports are also known nationwide through the Broncos.

Friends of jazz, indie rock and theater will also not find the city boring. The Gene Harris Jazz Festival and Treefort Music Fest take place here in the spring, and the Idaho Shakespeare Festival should be visited in the summer months. Art lovers can visit the Boise Art Museum.

In Idaho there are at least 45 wineries across the country that you should also visit. There are also numerous breweries, which you can often visit. The state is also known for its blueberry products such as homemade jam or blueberry syrup.

Outdoor athletes love the diverse possibilities such as white water rides on the rivers or at Hells Canyon. For ski lovers in winter, but also for other athletes such as hikers, cyclists and riders in summer, Sun Valley is an attractive place for stays and excursions all year round.

Parts of the Yellowstone National Park are also in Idaho, a visit to the Yellowstone Baer World with numerous bears near the city of Rexburg is also interesting. The famous Perrine Bridge (148 m above the river) leads over the Snake River near Twin Falls.

The sand dunes at Bruneau Dunes State Park are impressive, but you can visit a large observatory and watch the stars at night.

A special landscape can be found at the Craters of the Moon National Monument (at 215 m the highest basalt cone on earth), one of the most remote regions in the USA. In Lewiston you can visit the Lewis-Clark Center for Arts and History. The city on Clearwater and the Snake River on the Washington State border is also the only port in the state of Idaho that can be reached by seagoing ships. 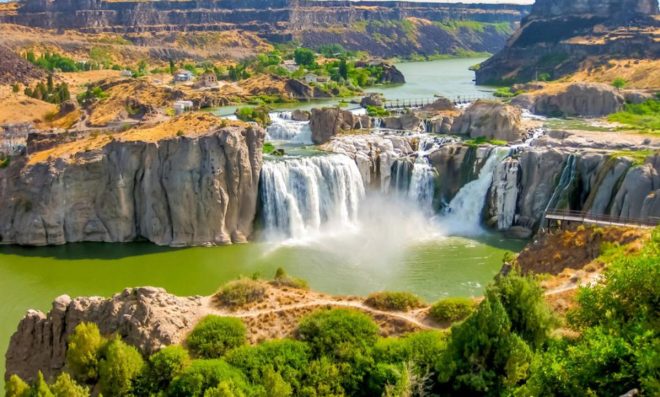