As the 50th state, this archipelago in the Pacific Ocean was annexed to the USA in 1959 and is the dream vacation destination for the Americans. The Aloha state, whose Polynesian name means home, lives from tourism and pineapple cultivation. Hawaii has over 900,000 residents. Captain James Cook was the first European to discover the Hawaiian Islands in 1778. The first mission stations were founded in 1820 and annexed by the United States in 1898. The capital is Honolulu and is located on the island of Oahu.

The first wave of colonization probably occurred from Polynesians between AD 400 and 650. They came from the Marquesas Islands, 4,000 km away. In the 11th century, Polynesian immigrants made their way to Hawaii from the island of Tahiti, about 5,000 miles away, to oust the first settlers. They had double hull sailing boats made from hollowed out trunks and sealed with resin. The trunks, which were only connected with coconut fibers and were used as sails for large palm leaves, could accommodate up to 100 people.

The archipelago was first discovered by the Europeans in 1778 by Captain James Cook. The discovery was pure coincidence, because he actually wanted to find a cheap shipping route between Alaska and Siberia with his ships.

The 8 main islands Niihau, Kauai, Oahu, Molokai, Lanai, Kahoolawe, Maui and Hawaii (also called Big Island) are each a scenic gem in their own right.

Big Island, the other name for the main island, is the largest of all Hawaii or Sandwich Islands with an area of​​10,450 km². The landscape is very diverse, it consists of lava deserts, rainforests and huge cattle pastures. In addition to livestock farming, coffee and sugar cane are mainly grown. The capital is Hilo. The Mauna Kea with 4205 m and the Mauna Loa with 4169 m are the highest peaks of the islands. The island is of volcanic origin, as evidenced by the still active volcanoes.

This island is only 1433 km² in size and has an overwhelming variety of landscape forms and is therefore also called “The Garden Island”. Kauai has approximately 51,000 residents who live mainly in and around Lihue, the only city on the island. Mainly sugar cane and tropical fruits are grown. The north of the island is mainly rural and the west coast is almost uninhabited. Dense, green, tropical rainforests on the mountain slopes and a colorful floral display are predominant here. Tourism is not as developed here as it is on Oahu.

Maui is 1885 km² and is the second largest island. However, fewer people live here than on the Big Island and Oahu (approx. 88,000 residents). Maui consists of two large volcanic massifs with narrow and steep valleys. Exotic fruits, sugar cane, pineapple and vegetables are grown there and on the gently rising valleys. Because of the very fertile soil, large sugar cane and pineapple plantations were created on Maui. In addition to Oahu, Maui is visited by most tourists.

Niihau is only a 180 km² island, which, with Lake Halulu, is the largest lake in the entire archipelago. Otherwise, Niihau is still an island largely undeveloped by tourism.

With 1575 km², Oahu is the third largest island in the Hawaii Islands. Honolulu is the largest city in the state of Hawaii (approx. 830,000 residents). In terms of landscape, Oahu is an island of contrasts: in the south the densely built-up Honolulu with the hotel skyscrapers of Waikiki, while in the north there are rainforests, bananas and sugar cane plantations, rocky coastlines and bathing beaches. Two mountain ranges of volcanic origin, the Koolaus in the east and the Waianae Mountains in the west, stretch from north to south over the entire island. In between there is a wide fertile plain.

Molokai, the sparsely populated approx. 673 km² island is still very rural. You won’t find high-rise buildings here. The tropical, densely overgrown island with the beautiful beaches is a paradise for vacationers who are looking for peace and quiet. Mass tourism is not promoted here. That is why there are few hotels here, including only one luxury hotel. The local population lives largely from agriculture (melons, vegetables). The Molokaʻi Forest Reserve is ideal for hiking. There you can explore Mt. Kamakou, which is over 1500 m high, or the 75 m high Moaula Falls. A 4×4 ride is also possible. The beaches offer the possibility for all kinds of activities such as diving, swimming, surfing etc.

Anyone who loves the beach and nature cannot miss Hawaii. The state consists of islands, which are quite different from each other. There are 19 islands and atolls (formations in the middle of the ocean), the best known being Oahu, where the capital is Holonunu.

One of the postcards there is Hanauma Bay, a beach that has a different concept, as it is formed by an ancient volcanic crater and home to an incredible variety of marine life.

The friendly greeting ‘Aloha’ was made the epithet of the state. Hawaii is an island chain and the 50th state in the United States. Above all, the state is known for its friendly people and a relaxed life. Miles of beaches, world-class surfing areas, volcanoes, and much more. The capital Honolulu and Maui in particular are very well known cities here.

The archipelago stretches almost two and a half thousand kilometers in length and Iceland ‘hopping’ is the fastest way to fly. The islands that are open to tourism are called Maui, Molokai, Oahu, Kauai, Lanai and Hawaii alias “Big Island”. The different cultures, which have merged from the Polynesian and the Asian, shape the image of the Hawaii Islands. 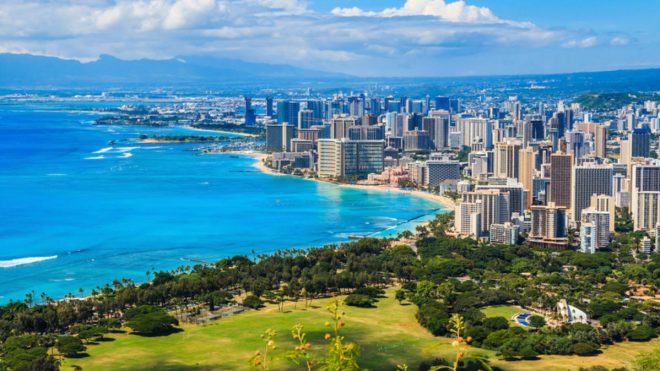