The country was conquered by the British in honor of their then king Georg || Called Georgia.

The Civil War – a formative phase

Georgia was one of the first colonies to unite against British rule in the colonies. The state later belonged to the Confederate States of America during the Civil War. Georgia was also one of the states most affected by the effects of the war and was badly destroyed. The capital, Atlanta, was also affected. The ruins of the old buildings can still be seen today. It was only in 1798 that the state was the last state to ban slave trade. The possession of slaves remained unpunished.

Much of Georgia has a humid subtropical climate. In the northern mountains, the climate is cooler and there is more rainfall. The south of the country is often hit by storms and hurricanes. The southern coast in particular is often hit. Most people live in the Atlanta area and in some coastal towns. The Atlantic coast is a popular holiday destination, especially in the spring break period.

Georgia’s landscapes range from white beaches on the coast to mountains in the north. The climate, weather and nature differ dramatically in each region.

In the south on the border with Florida there is another climate, weather and natural spectacle. Popular destinations in the south are the city of Augusta and the Savannah River. Like Florida, the region is particularly popular with golfers. Huge spaces and extensive facilities are available in large numbers.

Southwest Georgia is rural. Here you can still find farms and plantations whose history dates back to before the Civil War. Those interested in history can also find some facilities here that can be visited. Otherwise, walks through nature, between the farms and plantations are worthwhile. Hikers will also get their money’s worth here. Numerous hiking trails are officially advertised and signposted.

Atlanta is considered the metropolis of the southern states and is located in the north of Georgia. The metropolitan region around the capital with its many monuments testifies to the exciting history of this region. The airport is referred to in many sources as the world’s busiest airport. During the civil war, the city was razed to the ground. Some remains can still be seen today. Film Fans know the city from the film Gone with the Wind.

In Margaret Mitchell House, many finds from that era can be admired. As the birthplace of Martin Luther King, Atlanta also dedicates many museums and squares to the history of the civil rights movement. King’s Tomb is now a national memorial and is visited annually by countless people.

Atlanta offers a variety of modern architecture, culture and museums in which one can experience and experience the different epochs. A popular family destination is the Coca Cola Museum or one of the many amusement parks located around the city.

Dynamic and lively cities, a tranquil coastline and amazing mountain scenery provide splendid experiences for those who travel to the state Georgia. The largest city in the state is Atlanta which is known for hosting many cultural programs and must-see parks.

One of the must-see places in Atlanta is its aquarium, the largest aquarium in the West. The aquarium has more than 10 million gallons of water, 500 different species of animals and thousands of sea creatures.

Georgia is located in the southern United States. This is where Coca-Cola was founded and the world’s most popular soft drink is still produced here. In addition to tobacco, many fruits and vegetables are planted and exported all over the world. The warm climate, beautiful nature and many sights make Georgia a very popular destination for tourists.

Atlanta is the state capital of Georgia and has over 420,000 residents. Many famous industries have their headquarters here, such as Coca-Cola, CNN, UPS or Delta Air Lines. The aquarium, the Martin Luther Kings burial site and the Atlanta City Hall also offer many excursion and shopping opportunities. 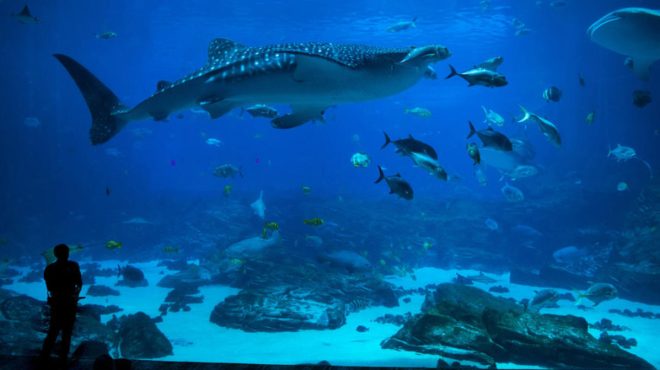