The New England state of Connecticut has an area of​​14,357 km² and is the third smallest state in the United States. The surname Constituion State was passed by law in 1959 and refers to the constitution of 1638, the oldest in the world when the state was still a colony.

Connecticut was formed in 1639 from the 3 settlements of Windsor, Wethersfield and Hartford. In 1776 Connecticut declared independence from Britain and in 1788 Connecticut became the 5th state in the United States. Slavery ended in Connecticut in 1848. The name Connecticut originally comes from the Algonquin (Quinetucket) language and was derived from it. Connecticut is located in the northeastern United States and is bordered in northern Massachusetts, east by Rhode Island, south by Long Island Sound and west by New York.

Despite its small size, the Connecticut landscape is very varied. In the northwest, the landscape is criss-crossed by hills. Around the Appalachian Mountains there is the highest elevation with the 725 m high Mount Frissel. The landscape flattens to the south to Long Island Sound. Over half of the state is forested, interspersed with lakes, rivers, and waterfalls that make up more than 10 percent of the country’s area. There are beautiful sandy beaches on the Atlantic coast.

Connecticut has a diverse flora and fauna. Although densely populated, you will find black bears, wolves, elk, foxes, lynxes, weasels, coyotes and muskrat among others. The diverse bird life is represented here, for example, with the golden eagle, many owl species, the hen harrier and the bald eagle. On the Atlantic coast, fulmares, shearwaters and puffins dominate the bird life. The share of forest in Connecticut, like in the other New England states, is quite large and is determined by deciduous and mixed and also coniferous forests. In autumn, the forests lure with their colors. This period of splendor of colors is also called Indian Summer. Connecticut is home to more than 100 tree species. The maple trees, which are represented here with over 10 different species, are particularly striking. Other dominant tree species are beech, oak, elm and spruce. Various types of fern are found in the forests, some of them reaching a height of 1.50 m. There are also over 100 wildflower species in the state’s natural landscapes.

In Connecticut, the Atlantic has a temperate continental climate, with warm summers between 25 and 30 degrees. The winters are moderately cold, around 0 degrees and partly snowy. Due to the influence of the Atlantic, it is quite changeable and windy with precipitation over 1,000 mm a year. The most rain falls in autumn. However, there can be a lot of precipitation in the form of snow, particularly in winter, to the northwest, where the level rises.

The varied natural landscape is very suitable for exploring on foot or by bike. Particularly interesting for mountain bikers are Bennett’s Pond and the Hemlock Hills, two connected nature reserves. There is a lot to discover in this varied piece of nature, among other things the paths lead through forests, meadows, over mountain ridges and through marshes. Particularly impressive are the large blocks of rock and the numerous cliffs, which give the landscape a primeval character. In Ridgefield, south of the Hemlock Hills, you can rent bikes.

Rafting tours over rapids with large inner tubes are offered on the Farmington River. The exciting water ride goes over a distance of 4 kilometers.

In addition to nature, Connecticut is also home to a number of interesting, historic buildings that are definitely worth a look. For example, the longest wooden bridge in the state, the West Cornwall Covered Bridge in Litchfield or the Beincke Rare Book and Manuscript Library at Yale, one of the largest libraries in the world. Here you can marvel at the original Gutenberg Bible. No less interesting is the gallery at Yale University in New Haven with over a hundred thousand exhibits from all over the world, the various museums and collections on the grounds of Harvard University in Cambridge and the First Presbyterian Church in Stamford. Don’t miss the Mark Twain House in Hartford, a Victorian mansion with original furnishings, or the Lymann Allyn Art Museum, where you can admire contemporary and impressionist American art. Not to forget the Shore Line Trolley Tram Museum in East Haven, the largest of its kind.

A visit to the ghost town of New Haven is a special tourist feature. On the ghost tour, which lasts 90 minutes, you can explore cursed places and learn interesting things about sightings of mysterious apparitions. You can also search for ghosts by Jimi Hendrix or Noah Webster to haunt the place.

Connecticut provides the perfect combination of experiences in a perfect location. Between New York and Boston, this is a place where nature and culture coexist. The city of New Haven is one of the most well-known destinations there for hosting Yale University.

While in New Haven, be sure to take a campus tour to visit the famous Yale University, founded in 1701. Be enchanted by the architecture of historic buildings, of exposed brick facades in older buildings.

The name Connecticut comes from the language of the Algonquian Indians, which means ‘on the long river of the tides’. One pronounces the state name ‘koneddikatt’.

The state is strategically located between the mega-cities of Boston, Massachusetts, and New York City, New York, and is now an insurance and industrial state. Hartford, the capital, is home to about 40 insurance companies, which earned her the nickname ‘Insurance City’.

Connecticut is a typical New England state where colonial style houses, small typical wooden churches with their white towers and English gardens can be found in many of the small rural towns and cities. 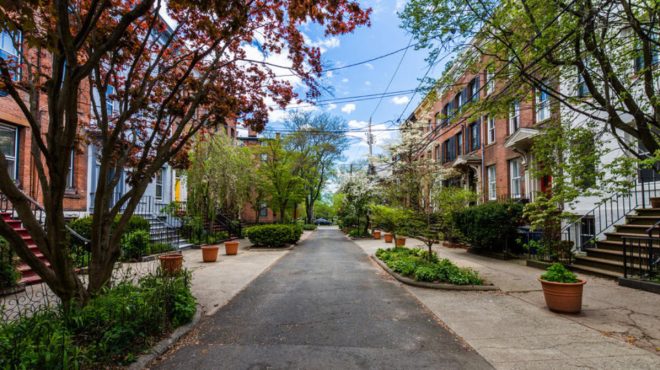