Arkansas is part of the southern United States and covers an area of ​​137,732 km². The capital is Little Rock, located on the banks of the Arkansas River. In 1686 Arkansas was first settled by the French, in 1803 part in the course of the Louisiana land purchase it was awarded to the Americans and in 1836 US state. Arkansas is also called The Natural State or Land of Opportunity. Arkansas is indigenous to the word and means for the Quapaw living here “land of the people living downstream”.

Arkansas was the original home of the Quapaw, Caddo and Osage Indians. Arkansas borders Missouri to the north, Mississippi and Tennessee to the east, with the 2,333 km long river of the same name forming the natural border with the states. In the south, Lousiana forms the border, while in the west Texas and Oklahoma are the neighboring states.

The geographic structure of Arkansas

Arkansas is dominated by mountains and forests. Over 60 percent of the country is forested. The Ozark plateau is particularly formative, with almost 122,000 km² the largest mountain range between the Appalachian Mountains and the Rocky Mountains. This highland region runs through northwest Arkansas. The south is dominated by the Ouachita Mountains, which are bordered by the Arkansas River. The two mountains belong to the so-called Ozark region and are called US Interior Highlands.

Mount Magazine at 839 m is the largest elevation in Arkansas and is located in the Ouachita Mountains. In the mountainous regions you will find a large number of cave systems in which you can find ever growing stalactites and stalagmites. South and east of Arkansas, the Lowland, also called Grand Prairie, dominate the landscape. As in the flat delta region of Arkansas, due to the fertility of the soil, the most important agricultural areas are located here. The delta region has a geological peculiarity: a band of 65 m to 170 m high hills (the Blanchard Springs Caverns) breaks through the flat delta landscape.

The subtropical climate is generally balanced here, the temperatures are in the pleasant or warm range. Only in the area around the Great Plains can tornadoes occur in spring. Spring shows itself from the mild side, the summers are warm with just over 32 degrees Celsius. Fall and winter (usually around 10 degrees Celsius), like spring, are determined by a mild climate. Some snow only falls in the higher regions.

The capital Little Rock with its historic buildings, well worth a visit include the Historic Arkansas Museum, the Old State House Museum where you can learn everything about the history of Arkansas, the MacArthur Museum of Arkansas Military History, the Junction Bridge from where you can see has beautiful city views. The Maumel Park is also worth a visit, where you can picnic and camp. There are many bars and shops.

Hot Springs, known for its thermal springs, is located near Little Rock. Not far from the town is the Hot Springs National Park, as the name suggests, you come across hot springs that are said to have healing effects. On many hiking trails with different difficulties you can admire the beauty of nature. Near the town of Murfreesboro is the Crater of Diamonds State Park where you can dig for diamonds and other precious and semi-precious stones for a fee.

The small town of Eureka Springs in the south-west also has hot springs in its vicinity, which are said to have healing properties. The place itself still has Victorian-style buildings. There is also a historic museum railway for visitors.

In the southwest of Arkansas, near Murfreesboro, is the Crater of Diamonds State Park with the only accessible diamond mine in the world. For a small fee, visitors can go on a treasure hunt and keep the finds. The appropriate equipment can be borrowed on site. Every year 600 diamonds are found on the 3.7 km² site.

The Arkansas Post National Memorial is just a few miles southeast of Gillett. It was built to e.g. B. to recall historical events such as the American War of Independence, the Civil War.

Have you heard of Arkansas? The state is known as the “Natural State” for its incredible streams and mountainous landscapes. But in addition to the natural attractions, the state is also home to large cities that are very important to the country’s economy and culture, such as Little Rock.

The city of Little Rock was home to Bill Clinton, the former president of the United States, and is therefore home to a memorial dedicated to him: the Clinton Presidential Center & Park. The place is one of the most coveted tours. In addition to a library, a park and a bridge, the city also has a space with a life-size replica of the Oval Office (Oval Office), in the White House, whose decoration recalls the times when it was occupied by Clinton. 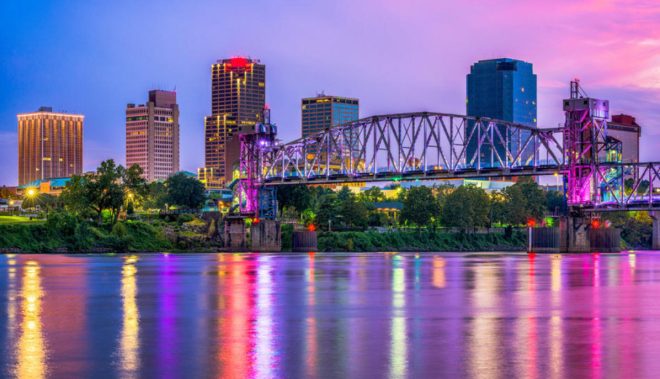