Alabama – A story full of war and peace

Long before Europeans founded their first settlements in this region, people lived here. When the first humans arrived around 9500 BC The sea level was much lower and therefore Alabama still had no coast. When the Europeans reached the region, there were four Indian tribes that were important here. These are the Chickasaw, the Choctaw, the Muskogee and the Cherokee.

The Spaniards brought many diseases with them to the region, which led to mass extinction among the Indians. At that time there were rivalries between the Spaniards and the English for the Alabama region and the area was divided into different parts.

At the time of the civil war, Alabama was on the side of the southern states and temporarily left the United States. The aftermath of this period can still be felt in many parts of the country.

Since Alabama is located in the south of the USA and therefore also has a small coast, the climate here is subtropical, which is strongly influenced by the Gulf of Mexico. The temperature is between 10 ° C and 35 ° C all year round.

Alabama is known for its beaches, wide golf courses and numerous history and science museums. The beaches are all located in the south of the state on the Gulf of Mexico. There are beautiful golf courses all over the state. The large amount of space and the good climate contribute to the perfect conditions for this outdoor sport.

Alabama’s museums are above average dedicated to the United States’ civil rights movement. The CIivil Rights Memorial Center and the Rosa Park Museum are just two examples of a long list. But not only civil rights but also science is dealt with extensively in museums. The US Space and Rocket Center is dedicated to space travel from its beginnings to the current state of science.

The residents traditionally divide their state into four parts. The north, the center, the south and the Gulf region of Alabama differ in many ways.

The north is especially known for the beautiful nature there. The landscape here has many lakes, waterfalls and forested mountain ranges. Well-known cities here are Athens, Florence, Huntsville and Tuscumbia.

The central part of Alabama is known for the beautiful cities and large waterfalls of Noccalula. Well-known cities here are Birmingham, Jacksonville, Tuscaloosa and Anniston.

In the south are the places that are interesting from a historical point of view. Here lies Selma with the well-known places and sights of the civil rights movement. Here is not only Selma but also the capital Montgomery.

The Gulf region is the famous coastal region. With its beaches, the region is particularly popular with beach holidaymakers. At the time of the spring break there are many young people here who spend their holidays here.

The Alabama, in the southern United States, is a state that meets beautiful and charming towns with history, culture and adventure. The capital and largest city of Alabama is Montgomery, which has many striking features – this is where the Alabama Capitol Building is located, a building made of white marble that stands out for its round dome.

Another famous spot in Montgomery is the small church where Martin Luther King, one of the most important leaders of the black civil rights movement in the United States, delivered his sermons. It is worthwhile to leisurely explore the city’s cultural spots and be amazed. 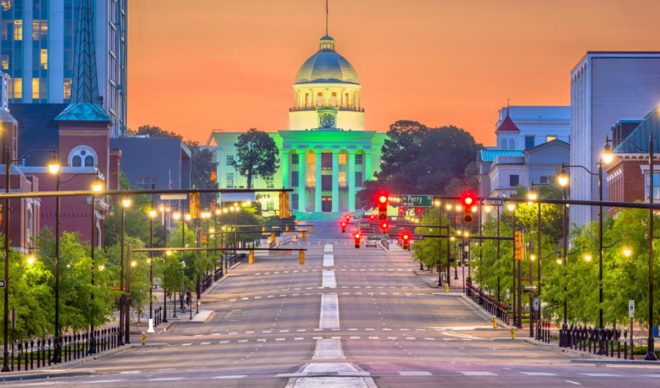